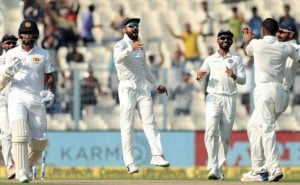 Kolkata: The first cricket test between India and Sri Lanka has ended in a draw.

Chasing a victory target of 231 runs, Sri Lanka were reduced to 75 for 7 when bad light forced early end of the match, played at the Eden Gardens here.

Earlier today, India declared their second innings with a total lead of 230 runs.