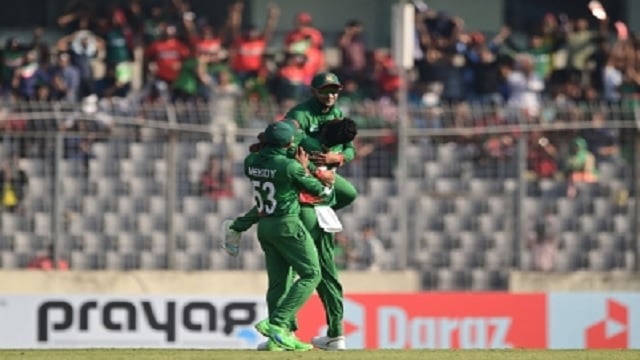 Dhaka: Shakib Al Hasan was the star for Bangladesh with a fifer while pacer Ebadot Hossain chipped in with four wickets as the hosts bowled out India for a paltry 186 in the ODI series opener at the Sher-e-Bangla National Cricket Stadium (SBNCS) in Mirpur, Dhaka, on Sunday.

On a slow pitch, Shakib varied his pace, lengths and used the crease well to spin a web around the Indian batters and left them bamboozled with his 5/36 in ten overs. Ebadot was superb in his short balls to pick 4/47 in 8.2 overs.

For India, KL Rahul made a fine 73 off 70 balls, but did not get any support from rest of the batters, who were caught in playing either inside or outside the line as the visitors fell to their second lowest ODI total against Bangladesh.

The first signs of spin were visible when off-spinner Mehidy Hasan Miraz beat Dhawan’s outside edge on his very first ball. In his next over, Mehidy had success as Dhawan succumbed to dot-ball pressure when his attempted reverse-sweep hit the stumps.

Rohit showed first signs of aggression by pulling Mahmud over backward square leg for six before sweeping Mehidy and cutting off the pacer again for a brace of boundaries. But his stay was cut short by Shakib, who got his slider that went on with the arm to castle him through the gate.

Two balls later, Shakib flighted one outside the off-stump to deceive Virat Kohli, who went for an uppish drive away from his body. But he was caught by captain Litton Das flying to his right to complete a sensational grab.

Bangladesh continued to make life difficult for India as Ebadot Hossain troubled Shreyas Iyer with a barrage of short balls while Rahul began by sweeping Shakib for six. Ebadot was finally rewarded for his persistence when Iyer tried to hook a short ball and top-edge was caught by keeper.

Rahul cashed on rare freebies from Bangladesh when he handsomely pulled a short ball from Mahmud over deep mid-wicket for six. As Mehidy offered width, Rahul was quick to sweep and loft down the ground for four and six respectively.

When Ebadot gave some width, Rahul swiftly opened the bat face to flay the cut through the off-side. Three balls later, he got his fifty in 49 balls when he slashed through backward point for a boundary.

From the other end, Washington Sundar was dropped on 12, survived a near mix-up and caught-behind dismissal on review. But he couldn’t make it big as he reverse-swept straight to third man off Shakib, breaking the 60-run stand for the fifth wicket.

It was a free fall for India as Shahbaz Ahmed cut straight to Shakib, who took a good low catch at over off Ebadot. Shakib piled more misery as his sliders took out Shardul Thakur’s off-stump and trapped Deepak Chahar plumb lbw in a span of four balls to complete his fifer.

Rahul tried to take India closer to 200-mark by slicing Shakib through third man for four, before lofting and flicking off Ebadot to pick six and four respectively. But the pacer had the last laugh as Rahul tried to pull off a short ball, but the extra bounce took top-edge to third man. Ebadot ended India’s innings in 41.2 overs by having Siraj caught in the deep off a short ball.

Vote for delivered promises instead of fake promises: Meenkashi Lekhi to Delhiites