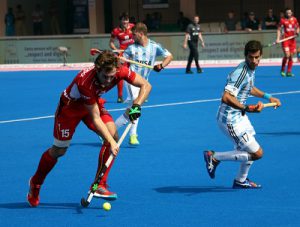 Bhubaneswar: In 2016, Belgium had to satisfy with a silver after they were thrashed by Argentina 4-2 in the final of the Rio Olympics. A year later, the revenge of sorts is taken at the Hockey World League Final at Kalinga Stadium here on Saturday.

Dominating right from the first quarter, Belgium kept troubling Argentina. A goal in the ninth minute, through a penalty corner of the match gave Belgium the early lead which continued till the 51st minute when Amaury Keusters slammed the ball into the nets doubling the lead.

Argentina pulled one back in the next minute, but a penalty corner conversion by Tom Boon with four minutes to go for the final hooter, ensured Belgium would pull this through.

Even in the dying minutes, Argentina looked for opportunities to score and gave some tense moments when they scored the second goal through penalty corner in the 57th minute.

“It is good to win against Argentina and win three points in the first game. Though it was not our best performance, we dominated through the game,” said Tom Boon of Belgium, who scored the second goal.