India suffered a huge blow ahead of Sunday's crucial crossover match against New Zealand in the FIH Odisha Hockey Men's World Cup 2023 when key midfielder Hardik Singh was ruled out of the tournament with a hamstring injury. 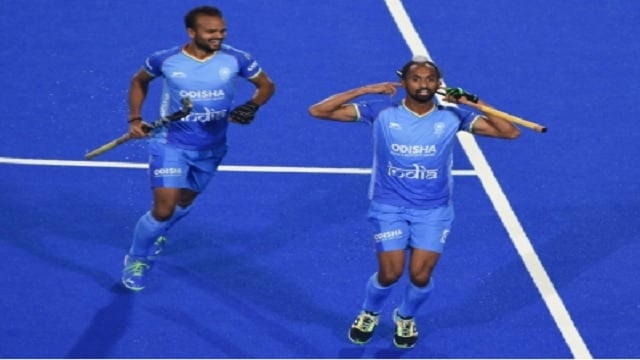 Bhubaneswar:  India suffered a huge blow ahead of Sunday’s crucial crossover match against New Zealand in the FIH Odisha Hockey Men’s World Cup 2023 when key midfielder Hardik Singh was ruled out of the tournament with a hamstring injury.

Hardik Singh was the livewire in the midfield in India’s first two matches in Pool D and sustained a hamstring injury during the clash with England on January 15. Having rested the youngster for the match against Wales, and subsequent assessment, Hardik has now been ruled out of the World Cup, Hockey India confirmed on Saturday.

“Overnight we had to make the difficult decision of replacing Hardik Singh in the Indian Team for Sunday’s match vs New Zealand and the subsequent World Cup matches,” chief coach Graham Reid said while talking about the decision made by the team management.

“While the injury was not as severe as the initial incident suggested, time was not on our side and after our ongoing thorough rehabilitation process and functional and on-field assessment today, it has been decided that we will replace Hardik with Raj Kumar Pal. While it is extremely disappointing for Hardik personally of course, given how well he played in our first two matches, we are excited at the prospects of Raj Kumar joining the group for the remaining World Cup matches,” Reid was quoted as saying in the Hockey India release on Saturday.

Having finished second in Pool D, India will need to win against New Zealand in the crossover match on Sunday to reach the quarterfinals.