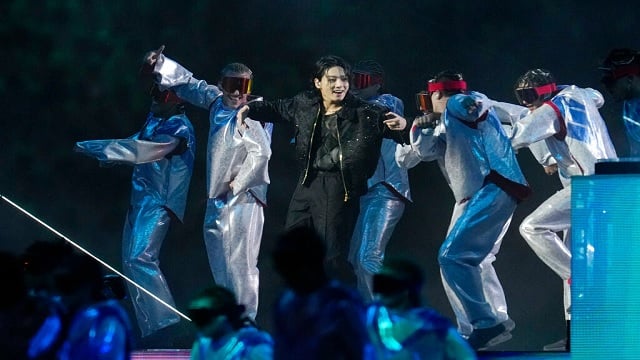 Doha (Qatar): One of the most popular faces in Hollywood Morgan Freeman and South Korean singer BTS’ Jung Kook stole the limelight during a glittering opening of the FIFA World Cup 2022 at the Al Bayt Stadium here on Sunday.

One of the non-musical performers was American actor Morgan Freeman. The 85-year-old narrated the event live and delivered a speech about the “emotions that connect us all now”. It spanned around 20 minutes and kept the audience all around the world glued to their screens.

However, besides Freedman, the real star of the nearly hour-long ceremony had to be BTS’ Jung Kook laying down his new tune “Dreamers” for the 60,000-capacity stadium. Surrounded by dancers, the international superstar and South Korean supporter set the standard for World Cup opening ceremonies to come.

The stadium was also packed as the glitz and glamour of the ceremony caught all the limelight. Some of the superstars of the world performed.

Among the famous faces in the crowd was former England captain David Beckham, who has been working as an ambassador for Qatar 2022.

One of the most colourful elements of the show was an appearance by all former World Cup mascots, including South Africa’s Zakumi and Footix from France 1998.

After the performances, His Highness The Amit, Sheikh Tamim bin Hamad Al-Thani gave a speech.

“Welcome and good luck to all,” he said in English. His speech was followed by loud cheers by the crowd.