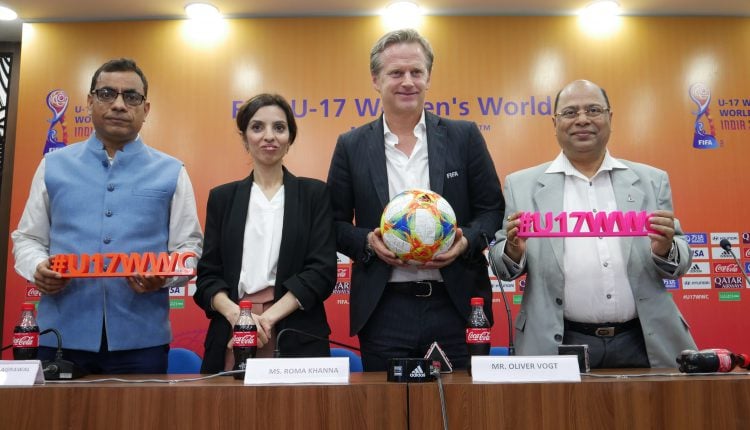 Kolkata: An eight-member FIFA delegation led by Oliver Vogt is visiting India between 26th November 2019 and 1st December 2019 for an official FIFA inspection to evaluate the progress and preparations for the FIFA U-17 Women’s World Cup India 2020.

Ahead of the inspection, Project Lead of FIFA U-17 Women’s World Cup India 2020, Oliver Vogt addressed the media in Kolkata and said, “We are very happy to be in India to start the inspection. It is great to be here, and we are looking forward to seeing how things are shaping up. We saw the potential of football in India in 2017 with the men’s edition, and understand how big a success it was here in Kolkata.

“We are confident that every stakeholder will work hard to ensure the FIFA U-17 Women’s World Cup India 2020 is a success and that the tournament also makes its mark in the history of women’s football. In this visit, besides the infrastructure of the stadium and training sites, we are interested to see the plans that the different venues have for the further development of women’s football in the country”.

“It is great to be back at this iconic stadium, which put its name in history in 2017. The active involvement of the CM and the Government of West Bengal was crucial in the success in 2017. Given this is a women’s tournament, and CM’s enthusiasm towards empowerment of women, we’re confident of similar support for the FIFA U-17 Women’s World Cup as well. That will be key in creating the same experience for the fans and the teams in Kolkata,” added Tournament Director of the Local Organising Committee, Roma Khanna.

The FIFA and LOC delegation will inspect the stadium and training sites in Kolkata tomorrow, and follow it up with an inspection in Guwahati on Thursday, 28th November 2019. The FIFA U-17 Women’s World Cup India 2020 will be held between 2nd and 21st November.

Man Dies After Being Hit By Car In Khordha

Buddhist monuments in Odisha’s Jajpur district on the verge…