CT17: Australia vs New Zealand Tie abandoned due to Rains 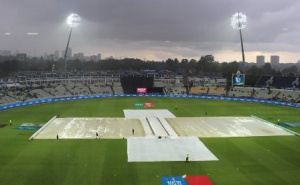 London: Rains came to the rescue of Australia, as they were reeling at 53/3 in 9 overs while chasing a victory target of 292. The match abandoned due to heavy rains and wet outfield with both teams sharing one point each.