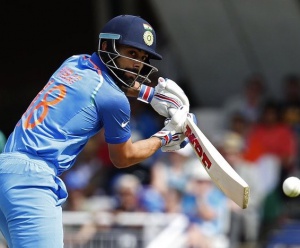 London: The virtual quarterfinal match between India and South Africa turned out to be an one-sided contest, as Team India registered an emphatic eight-wicket win to storm into the semifinals. England and Bangladesh have already qualified for the last four.

India will take on Bangladesh in the semifinal on June 15.

Earlier, India won the toss and elected to field first. South Africa bowled out for 191 in 44.3 overs. Quinton de Kock 53, Amla 35 and Faf du Plessis 36 were the top scorers. Bhuvneshwar 2/23 and Bumrah 2/28 were the successful bowlers.

In reply, India lost Rohit Sharma early, but Shikhar Dhawan (78) and Virat Kohli (76*) batted sensibly to take the game away from South Africa. India reached 193/2 in 38 overs. Yuvraj remained unbeaten on 23. Jasprit Bumrah was declared ‘Player of the Match’.