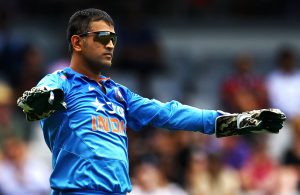 Mumbai: The Board of Control for Cricket in India (BCCI) on Wednesday nominated former skipper Mahendra Singh Dhoni for the country’s third highest civilian award — the Padma Bhushan — for his outstanding contribution to the game of cricket in India and the world at large.

“Mahendra Singh Dhoni has been nominated by the BCCI for the Padma Bhushan award. It was a unanimous decision by the members. He has been one of the greatest names in contemporary cricket and the most appropriate choice of the Indian cricket board,” BCCI acting president CK Khanna told PTI today.

The BCCI has not sent any other nominations for the Padma awards this year.

Dhoni is considered the most successful captain in Indian cricket. Under his leadership, the men in blue have won two World Cups in limited overs cricket– 2007 World T20 and 2011 50-over World Cup. He also led India to the No. 1 position in the ICC Test Rankings in December 2009.

Dhoni is already a recipient of the prestigious Arjuna, Rajeev Gandhi Khel Ratna and the Padma Shri award. If he is conferred with Padma Bhushan, he will become the 11th Indian cricketer to get the third highest civilian honour.