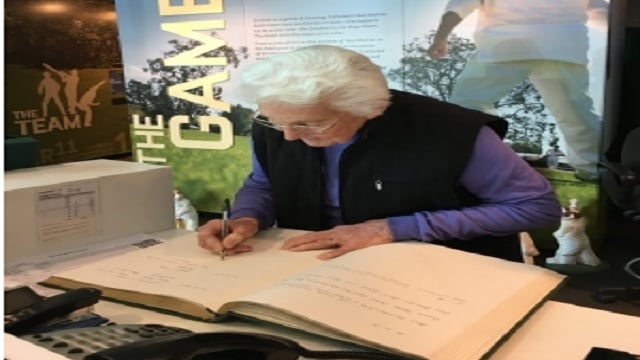 A middle-order batter and medium pace bowler, Norma scored 151 Test runs at 25.16 and took 22 wickets at 17.26 and is remembered as a valuable and highly popular member of the post-war Australian Women’s team.

“Everyone across Australian Cricket will be saddened to hear of Norma’s passing. As a pioneer, Norma not only made a wonderful contribution as a player but helped set the platform for the many thousands of women and girls now playing the game.”

“On behalf of everyone in Australian Cricket I would like to offer my sincere condolences to Norma’s family and friends at this sad time,” said Nick Hockley, CA Chief Executive, in an official statement.

Australian Cricket is mourning the loss of Norma Johnston (nee Whiteman), who has passed away aged 95.

Norma played seven Tests from 1948-51 and, until her passing, was Australia’s oldest living Test cricketer.

Our thoughts are with her family and friends. pic.twitter.com/owdJhhbnZu

Her outstanding potential was first recognised in the annual NSW Country Week tournament and her selection for NSW and then Australia helped inspire more female participation in her region. Norma returned to Bathurst upon her retirement in 1951 where she became an integral part of her local sporting community.

The Australian Cricketers Association (ACA) called Norma as a dear and much-loved member of the association and a trailblazer who helped lay the path for all of the women playing the game today while adding that only last year, the sightscreen at the Bathurst Sportsground was named in her honour.

“Norma was regarded as a players’ player, a sound middle-order bat, and a second- or third-change bowling option. Off the field, she was remembered by her teammates as a beautiful personality who was always fun to be around.”

“Her inspiration and influence extended across generations – including Ellyse Perry, who Norma fondly recalled meeting when the Australian star was just 15 years old.”

Australia Men’s Test skipper Pat Cummins also paid tribute to Norma through Twitter. “This morning I was deeply saddened to hear of the passing of Norma Johnston. Norma was a pioneer of the women’s game and until her death was Australia’s oldest Test cricketer.”

“She was passionate about cricket, about her home town of Bathurst and the many women who would follow in her footsteps representing their state and country. Her contribution to Australian cricket and the friendships she made with so many within the game will live on forever. My thoughts are with her family and many friends.”

Accused confess to police, Say they knew the woman was stuck under the car