Australia could miss the services of seasoned pacer Mitchell Starc in the third Test against South Africa in Sydney after suffering a finger injury. 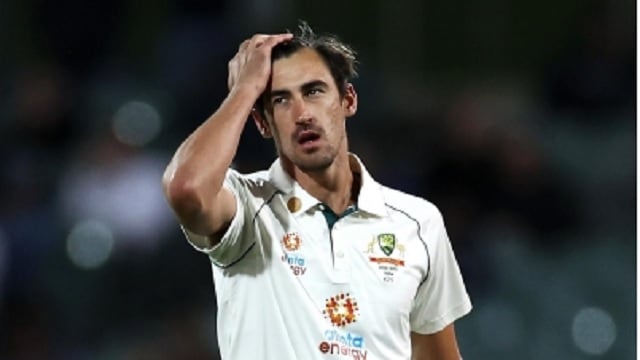 Melbourne:  Australia could miss the services of seasoned pacer Mitchell Starc in the third Test against South Africa in Sydney after suffering a finger injury during the ongoing Boxing Day Test at the Melbourne Cricket Ground here.

Starc dislocated the tip of his middle finger on his left hand, his bowling hand, while attempting to take a catch at long-on during the second session on day one of the match and was taken for scans

The 32-year-old left-arm pacer, who had taken 2-39 off 13 overs, left the field after the injury and reportedly went for a scan. He did return to the field towards the end of South Africa’s first innings but was not required to bowl as the visitors were shot out for 189.

On the second morning of the match on Tuesday, Cricket Australia said Starc, who batted in the nets before the start of play, has been cleared to take further part in the match and would bat if needed. It did not give out the result of the scan but said a final decision on his participation in the Sydney Test will be taken at the end of the Boxing Day Test.

In case, Starc has to miss his home Test, starting on January 4, Australia have two bowlers in their squad — Josh Hazlewood and Lance Morris — who can replace him.

Australia could opt for Hazlewood, who was in contention for the Melbourne Test after recuperating from an injury but Scott Boland was preferred ahead of him. Morris was earlier this year called up as cover for Starc for the Adelaide Test against West Indies.

According to a report in ESPNCricinfo, Australia could also bring in an extra spinner for the Sydney Test as the pitch for the only Sheffield Shield match played there this summer was a spinner’s paradise with New South Wales offspinner Chris Green taking nine wickets and West Australia offspinner Corey Rocchiccioli claiming eight in a low-scoring game.