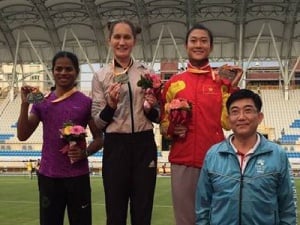 Dutee secured the silver after finishing at 11.52 seconds during the last leg of the three-leg Asian Grand Prix 2017.

Earlier on April 24, Dutee had won the bronze medal in the first leg of the AGP 2017 in Jiaxing. Similarly, she had bagged the silver in the second leg of the competition in Jinhua on April 27.