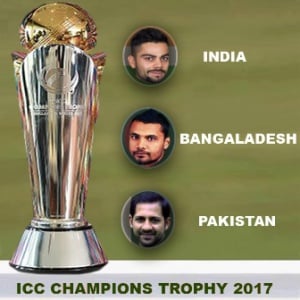 London: In the ongoing ICC Champions Trophy Tournament, all semifinalists have been confirmed after Pakistan notched up a three-wicket win over Sri Lanka in their must-win Group B match on Monday.

Now, group A topper England will lock horns with Pakistan in the first semifinal on Tuesday at Cardiff Wales Stadium. In the other semifinal to be played on Thursday, India, which is at the top in the group B points table, will take on Bangladesh at Edgbaston Cricket Ground in Birmingham.

Interestingly, among all semifinalists three are Asian countries: defending Champion India, Pakistan and Bangladesh. Another Asian country Sri Lanka narrowly missed the semifinal berth after losing the virtual quarterfinal against Pakistan on Monday.

The road to semifinal, however, has been a roller coaster ride for all three teams from the sub-continent. India defeated arch-rival Pakistan in their first match but lost to Sri Lanka in their second match. However, the Virat Kohli led “Men in Blue” bounced back in the last league match against the mighty Proteas to seal their semifinals berth.

Similarly Bangladesh lost their first match to hosts England and shared equal points with Australia in the second match, thanks to the Rain-God. But in the third match, the young Bangladesh team showed great character to defeat the comparatively stronger New Zealand.

Pakistan also started their journey on a losing note against their arch-rivals India. They, however, managed to win the second match against South Africa according to Duckworth-Lewis rule. And finally, they displayed their true character against Sri Lanka in the third league match to storm into the semifinals.