Litton Das struck a counter-attacking fifty to take Bangladesh's lead to 108 against India at the end of the second session in the Dhaka. 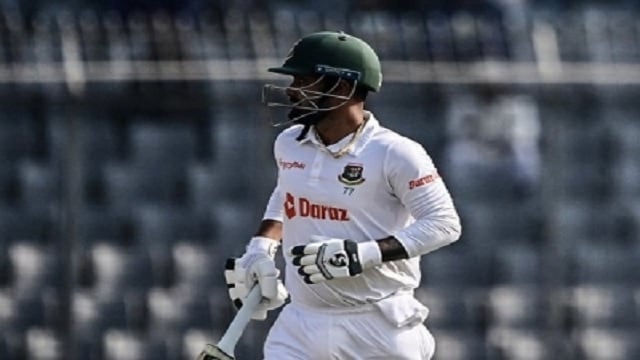 Dhaka:  Litton Das struck a counter-attacking fifty to take Bangladesh’s lead to 108 against India at the end of the second session in the Dhaka Test against India on Saturday.

At tea, Bangladesh were 195/7, with Das unbeaten on 58 off 78 balls, his 15th Test fifty and led the hosts’ fightback with crucial partnerships of 46 with Nurul Hasan, who made 31 and an unbeaten 46-run stand with Taskin Ahmed.

India took three wickets in the session, including ending Zakir Hasan’s resistance at 51. But the visitors didn’t help themselves with dropped catches, with Virat Kohli dropping Das twice on 20 and 49.

The session started on a sour note for India as they lost their third and last review in the 37th over, when replays confirmed that Zakir had got an inside edge on an inswinger from Jaydev Unadkat.

Shortly after helping Bangladesh take lead, Zakir reached his fifty with a straight drive on the front foot for three runs. When Umesh Yadav pitched short and wide of the off stump, Zakir went for an expansive cut. But couldn’t keep it on the ground and the third man took a good low catch.

Das had an early escape twice against Axar Patel, when Kohli missed the chances of taking catches at slip, giving the right-hander two boundaries. But the left-arm spinner had success in his next over when he trapped Mehidy Hasan Miraz lbw while going for a sweep.

Nurul set the base for a counterattack by slashing Umesh Yadav through covers for a boundary, before dancing down the pitch to smack Ashwin for a six-over long-on. Das joined the party by sweeping Axar twice through on the leg side for a brace of boundaries.

Nurul had a reprieve when Axar extracted the outside edge off his bat, but deflected off the keeper’s glove and Kohli at slip couldn’t take the catch at all, giving the batter a boundary. The 46-run partnership came to an end when Nurul came out to hit against Axar and was stumped from behind.

On the stroke of tea, Axar trapped Das lbw with a skiddy, quicker delivery. But Bangladesh got to change the on-field call as replays showed the ball missing the leg stump. Kohli put down another catch at first slip off Ashwin, giving Das a reprieve and his half-century. Das and Ahmed took a boundary each off Ashwin and Axar respectively till tea arrived.

Tired of bad breath? Here is how you can get rid of halitosis