Sri Lanka skipper Dasun Shanaka won the toss and elected to bat first against India in the second ODI at Eden Gardens, Kolkata, on Thursday. 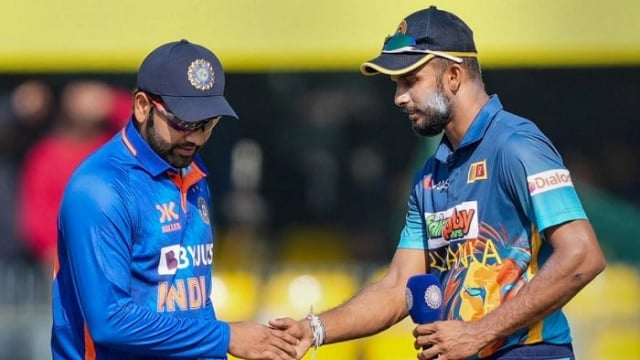 Kolkata:  Sri Lanka skipper Dasun Shanaka won the toss and elected to bat first against India in the second ODI at Eden Gardens, Kolkata, on Thursday. India are currently leading the three-match series 1-0, after a 67-run victory in Guwahati.

After winning the toss, Shanaka said opener Pathum Nissanka and left-arm pacer Dilshan Madushanka are ruled out due to injuries. In place of the duo, fast bowler Lahiru Kumara and batter Nuwanidu Fernando come into the playing eleven.

Nuwanidu is the brother of fellow Sri Lanka player, fast bowler Vishwa Fernando, and is making his ODI debut in Kolkata. “Very good wicket to bat first, also looking at the venue stats. Important to score, be relaxed and play our natural game,” he added.

India skipper Rohit Sharma said left-arm wrist-spinner Kuldeep Yadav comes in for leg-spinner Yuzvendra Chahal in the playing eleven as the latter didn’t pull up well in the morning after making a dive while fielding in the ODI series opener.

“I was in two minds. Wanted to bat first because of how we played last time, but looking at this ground, I wanted to field. Overall, improvements are as a team, nothing in particular.”

“What we’ve done in the past is in the past, we need to look ahead and keep doing better. I love playing here, the crowd is also energetic and that motivates me always. But it is in the past, I need to start fresh,” he added.

This state is giving amazing subsidies on electric vehicles, get the details here