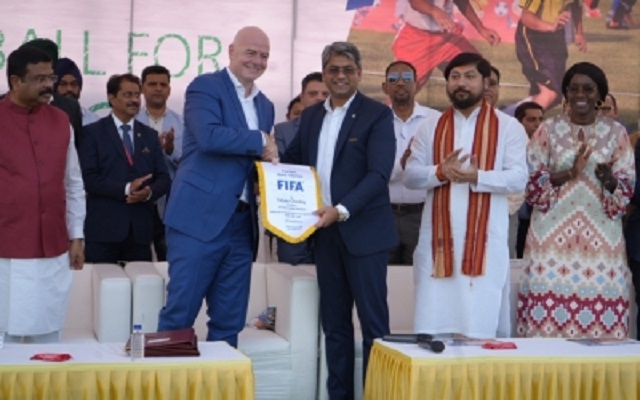 Mumbai: The All India Football Federation, Union Ministry for Education and the FIFA signed a Memorandum of Understanding (MoU) to broadbase football across various schools in the country through the Football for Schools programme

The MoU was signed between the FIFA, Education Ministry, and the AIFF to introduce Football for Schools programme to India, which will see the game of football being propagated to a large number of schools across the country.

Infantino said before signing the MoU, “I very much believe in India’s potential. India is a great nation, it is a continent in itself with lots of skills and not just in football of course. The most important thing is the heart and passion that the country has. We need that in football.

“I am proud and happy for this partnership with the Government of India and the AIFF. We will be investing in education and schools. We believe that playing any sport is important at an early age. It teaches you the values of many important things in live. We want the best players in the world to come from India,” said Infantino. “You have the population, skills, and the ability to unleash that potential. Through the values of sports, I am sure we will see some fantastic results in the future.”

The FIFA president went on to elaborate on the values that FIFA is looking to propagate through Football for Schools.

“Football for Schools is not just about teaching football. It is much more than that. It gives lessons of life through values of football – respect for opponents, referees, teammates, helping each other, relying on one another, resilience – these are just some values,” he said. “When you win, you are happy till the next game. When you lose, you are sad for a few days, and then you again start building towards the next match. There are other values like no discrimination, gender equality and belief in yourself. These are lessons for both football and for life.”

“I am delighted that FIFA is now our partner to the Government of India, and we are collaborating on a global programme. FIFA has ambitious targets for the Football for Schools project, and we are happy to play a big role in it,” said the Education Minister.

“Out of the 700 million children that FIFA plans to reach out to worldwide, we are taking responsibility for 25 million here in India. One of the main features of Prime Minister Shri Narendra Modi ji’s programme is to have sports as a mainstream part of education, and this programme will go a long way in achieving that dream.”

AIFF president Kalyan Chaubey welcomed Infantino to India, and thanked both the Education Ministry and FIFA for helping the federation broad-base the game in India.

“I would like to thank FIFA President Mr Infantino, Education Minister Shri Dharmendra Pradhan ji for their immense support in this project and giving us the strength to reach that number,” said Chaubey.