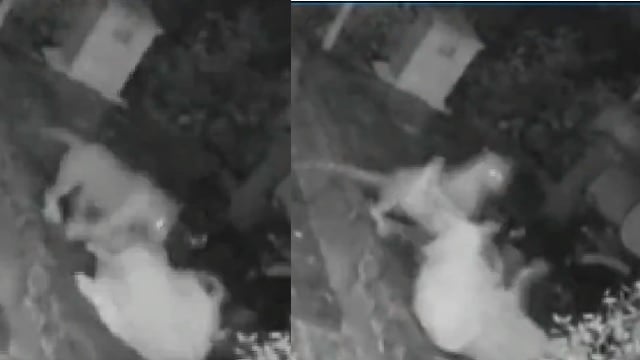 A hair raising video of a leopard attacking a middle-aged woman and the woman fighting back with a walking stick has gone viral on internet. The incident was reportedly happened in Aarey area of film city Mumbai on Wednesday evening. The woman is being praised for her bravery and presence of mind by people on social media.

In the video, the brave woman was seen fighting off the leopard with her walking stick which was about to attack her. The whole incident was captured in a CCTV.

The footage shows the leopard walking near the Aarey dairy area and enter the backyard of a house and roaming around the premises when the woman enters the frame. The leopard goes into attack mode immediately and waits as the lady slowly walks with the help of her walking stick and sits on an elevated platform with her back towards the feral animal.

The wild cat then prowls towards her with quite steps and was about to jump on her when the lady notices the animal and tries to push it away with her stick.

However, she fails to maintain her balance and falls on her side as the leopard attacks her. The lady tries to fend off the animal while it tries to pounce her and deliver a fatal injury.

After few nerve-wracking seconds the leopard retreats as it sees people rushing towards the spot after she shouts for help.

The woman has received minor injuries in the incident and is undergoing treatment.

This is not the first time a feral animal has attacked people in the area. This is the second such attack in the area in three days.

Two days ago, a 4-year-old boy was also attacked by a leopard in the area while he was playing outside his residence. The leopard attacked the boy tried to dragged him away. The boy was saved after locals rushed to his rescue.

Viral video: Students punished to stand in the sun for…

Nevertheless the video of the incident has gone viral on social media platforms and people are in awe with the lady’s bravery. Many also posted comment on the video.

The video was shared on Twitter by a user named Sohit Mishra, who wrote,” Scary visuals of a woman being attacked by a leopard in Aarey colony today. The woman is safe and undergoing treatment. This happened near Aarey dairy..”

Scary visuals of a woman being attacked by a leopard in Aarey colony today. The woman is safe and undergoing treatment. This happened near Aarey dairy.. pic.twitter.com/zTyoVzJ2HQ

One user wrote “Bold lady. Cheetah must have come in search of food as there is no food.”

While another wrote, “The great escape from the big cat.” One user also wrote, “She fought bravely and drove off the animal.”

#WATCH | Mumbai: A woman barely survived an attack by a leopard in Goregaon area yesterday. The woman has been hospitalised with minor injuries.

(Visuals from CCTV footage of the incident) pic.twitter.com/c1Yx1xQNV8