A Sambar deer was discovered inside a home in Katni, Madhya Pradesh, and was saved by forest department personnel. 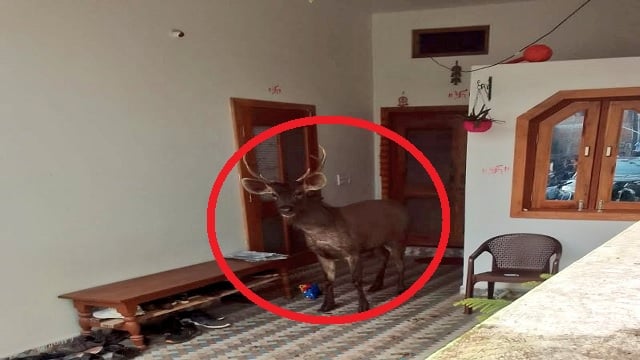 Human-wildlife conflicts are increasing in frequency and scope as human populations increase and animal habitats are destroyed. One such recent incident involved a Sambar deer that was discovered inside a home in Katni, Madhya Pradesh and was saved by forest department personnel.

In the first clip of the video, the men are seen encasing the deer in a net as they remove it from the house and in the second clip, a crowd of inquisitive bystanders gathered outside the house to observe the rescue effort.

The videos and the pictures were shared by the Indian Forest Service officer Gaurav Sharma on Twitter with a caption that read,” This Sambar became famous today. Around 1000 people witnessed its rescue from a house by RO Vivek Jain and his team in Vijayraogarh, Katni.”

The video was an instant hit as it went viral almost immediately after getting shared. So far, the video has garnered tons of likes and comments. Highly impressed by the video, netizens flooded the comment section with their reactions.

One user wrote,” I think it has come in search of the area where its ancestors lived.” Another commented,” Was there a need for so much drama for a docile animal like the Sambar? Could a forest official not just have attracted it with some eats and led it to a truck for relocation? I have come across multiple deer in IIT/M and I have never seen even one being aggressive.”