The humans follow the advice of ‘thande thande paani se nahana chahiye’ during the season of heat and sweat. However, it seems like human beings are not the only ones taking this suggestion to cool down, but also animals. It does not hurt to be kind to animals who are not equipped with intelligence like humans.

Just when you have though you have seen it all, a video, shared by Indian Forest Services officer Susanta Nanda on Twitter, has gone viral all over social media where a man can be seen bathing a cobra with a bucket of water.

The huge snake shows no sign of aggression rather stays still as the water is poured on it. The man repeats this a few times and is seen carefully patting the snake in between. IFS Nanda has even cautioned the viewers about the dangers of trying this at home. This might has a probability that the man had earlier experience in handling such reptiles.
Although the clip was posted on May 24 2020, the clip has gathered over 171.8K views till now and tons of shocked comments from netizens. The location and date of the clip remains unknown.

However, a Twitter user identified the man as conservationist Vava Suresh, who is an acclaimed expert of snakes from Kerala.

Does it seem unbelievable? Have a look at the clip and the man himself:

Most probably this gentleman is Vava Suresh, a Conservationist and Snake Expert from Kerala, India.
More details: https://t.co/8DSNEBifkX pic.twitter.com/b95l7sjuh1

Rare sight of King Cobra swallowing another Cobra will make…

On the other hand, check out some of the reactions of netizens: 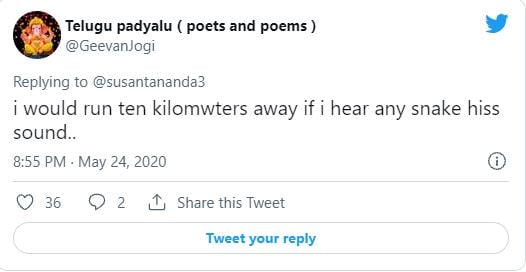 How to link PAN with your LIC policies, Follow the steps