Scary Video! Tourists Horrified As They Came Face To Face With Wild Tiger In The Forest 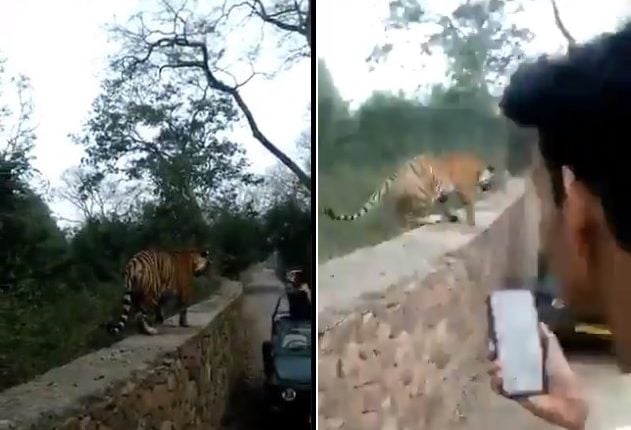 In a scary incident, a group of tourists had a close call with death as they came face to face with a tiger while taking its photos in a forest. The video of the incident has gone viral on the social media.

In the video, it can be seen that a group of tourists in two open Jeep were excited to see a tiger standing on the other side of a low wall and were all ready to take photos and videos with their phones.

However, the Tiger suddenly jumped gracefully onto the wall, which has been built to separate the wild animals from the tourists, and stared at them.

This sudden appearance of the tiger on the boundary wall shocked the tourists, some of them even screamed in horror while others shushed them.

Fortunately, the tiger left soon without harming tourists, who were already in a state of fear and shock due to the big cat’s sudden appearance.

The video has been shared by Indian Forest Service (IFS) officer Susanta Nanda on Twitter. The IFS officer criticised the behavior of the tourists and tweeted, “Idiotitis… When human brain shuts down & mouth keeps talking. Appreciate the anger management of the tiger. But that can’t be guaranteed in future.”

Watch: Scary video of Leopard attacking woman in her…

Appreciate the anger management of the tiger. But that can’t be guaranteed in future. pic.twitter.com/dSG3z37fa8

Several people also criticized the tourists for their rash behaviour on social media.

The video has already been viewed for 12.4k times and it has got 1.3k likes on Twitter.

“Our intrusion has crossed all limits,” remarked one Twitter user.

“We need to coin a word for forest/wildlife idiots. These people are plain lucky to be alive,” said another.

In A First, A Pet Kitten Tests Positive For Covid-19 In South Korea