A bride was recently seen in a video doing hard-core workout at a gym. While it seems a little bit unusual to witness a woman in bridal attire hitting the gym, the fact is that it was a pre-wedding photo-shoot. The video went viral after being posted to Twitter.

Rupin Sharma, IPS shared the video on his Twitter handle with the caption, “Pre-wedding shoot…Aaj raaz khula himmat ka….” (It is a Pre-wedding shoot, today the secret behind (her) courage was revealed).

We can see in the video that a woman is doing different types of workout at a gym while a photographer is busy taking her photos.

After being posted to Twitter recently, the video has earned huge response. The post has so far garnered 82 retweets, 11 Quote Tweets besides 675 likes. Moreover, Twitter users have come up with amazing as well as amusing replies.

A Twitter user has written ‘Devsena’. Perhaps he wants to compare the woman in the video with the courageous character ‘Devsena’ in the super hit film ‘Bahubali’.

Another Twiterrati has written, “This is today’s wedding secret”. 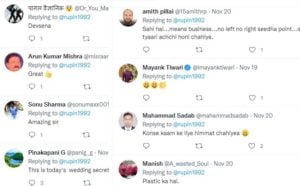 Some other users have given encouraging replies writing ‘Great’, ‘Baah” etc. while another user has written, “Sahi hai…means business…no left no right seedha point…shaadi jung hai tyaari honi chahiye.” (Right, means business, no left no right, right to the point, wedding is a battle and preparation should be good).