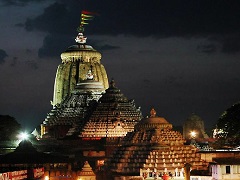 Shree Shree Jagannath Mahaprabhu lord of the Universe is the supreme solace and saviour of countless devotees around the world.

The famous Jagannath Temple of Puri is one of the major Dham of India. The sacred Hindu temple is located on the eastern coast of India, at Puri in the state of Odisha. Puri is one of the four holy dhamas and the others are Dvaraka, Badarinath and Rameshwaram. It is located 60km from Bhubaneshwar, on the coast of the Bay Of Bengal.

Puri is called Sri Purushottama Dham, the abode of the Lord Vishnu on earth. Other names are Sri Kshetra, Nilachala-dhama, Jagannatha-dhama, Martya Vaikuntha, Nilagiri, Shankha-kshetra, Dasha-avatara-kshetra and Narasimha-kshetra. Puri is about 2 km wide and 4 km long.

Every year thousands of pilgrims visit Puri and feel the charm of Jagannath darsan. Mahodadhi is the place where tourist spend their leisure time after visiting Shree Mandir.

The name Jagannath literally means the Lord of the Universe. King Indradyumna first established the temple of Lord Jagannath here on the Nilachala hill with the Deity being installed by Lord Brahma himself.

The main Deities in the temple are Lord Jagannath, His brother Lord Balabhadra, and his sister Subhadra.

The present temple was begun by King Chora Ganga Deva and finished by his successor Ananga Bhima Deva during 12th century.

In the Skanda-Purana, Brahma Purana and other Puranas and later Oriya works state that Lord Jagannath was originally worshipped as Lord Neela Madhaba by a Savar king (tribal king) named Viswavasu. Having heard about the deity, King Indradyumna sent a Brahmin priest, Vidyapati to locate the deity, who was worshipped secretly in a dense forest by Viswavasu. Vidyapati tried his best but could not locate the place. But at last he managed to marry Viswavasu’s daughter Lalita. After repeated requests of Vidyapati, Viswavasu took his son-in-law blind folded to a cave where Lord Neela Madhaba was worshipped.

Vidyapati was very intelligent. He dropped mustard seeds on the ground on the way. The seeds germinated after a few days, which enabled him to find out the cave later on. On hearing from him, King Indradyumna proceeded immediately to see and worship the Deity. But the deity had disappeared. The king was disappointed. The Deity was hidden in sand. The king was determined not to return without having a darshan and observed fast unto death at Mount Neela; then a celestial voice cried ‘thou shalt see him.’ Afterwards the king performed a horse sacrifice and built a magnificent temple for Lord Vishnu. Sri Narasimha Murti brought by Narada was installed in the temple. During sleep, the king had a vision of Lord Jagannath. Also an astral voice directed him to receive the fragrant tree on the seashore and make idols out of it. Accordingly, the king got the image of Lord Jagannath, Balabhadra, Subhadra and Chakra Sudarshan made out of the wood of the divine tree and installed them in the temple.

When Narada told the king to make three idols out of it and place them in a pavilion, Indradyumna got Visvakarma, the architect of Gods, to build a magnificent temple to house the idols and Vishnu himself appeared in the guise of a carpenter to make the idols on condition that he was to be left undisturbed until he finished the work.

After two weeks, the Queen became very anxious. She took the carpenter to be dead as no sound came from the temple. Therefore, she requested the king to open the door. Thus, they went to see Vishnu at work at which the latter abandoned his work leaving the idols unfinished. The idol was devoid of any hands. But a divine voice told Indradyumana to install them in the temple. It has also been widely believed that in spite of the idol being without hands, it can watch over the world and be its lord.

The temple complex comprises an area of 10.7 acres and is surrounded by 2 rectangular walls. The outer enclosure is called Meghanada Prachira. The walls are 20ft high. The inner wall is called Kurma Bheda. The walls were built during 15th or 16th century.

This temple has the largest kitchen in the world, and feeds thousands of devotees daily. The kitchen can prepare food for 1, 00,000 people on a festival day.

There are four gates of the temple like the Eastern Simhadwara (Lion Gate), the Southern Ashwadwara (House Gate), the Western Vyaghradwara (The Tiger Gate) and the Northern Hastidwara (Elephant Gate).

There are 36 traditional communities who render a specific hereditary service to the Deities. The temple has as many as 6000 priests. There is a wheel on the top of the Jagannath temple made of an alloy of 8 metals. It is called Nila-Chakra (blue wheel). Everyday a different flag is tied to a mast attached to the Nila-Chakra. Every Ekadashi a lamp is lit on the top of the temple near the wheel.

Thirty different smaller temples surround the main temple. The Lord Narasimha temple nearby western side of the Mukti-Mandapa, was constructed before the present temple. In front of the main gate is an 11 m pillar known as Aruna Sthambha. This pillar was once in front of the Sun Temple in Konark. It was bought to puri during 18th Century. The figure on the pillar is Aruna, charioteer of Sun god.

Lord Jagannath also known as Patita Pavana is visible from the entrance door to the Grand road, so that non-Hindus may take Darshan directly.

Some of the other temples within the walls of the temple house deities of Sri Chaitanya Mahaprabhu, Lord Rama Chandra, Sakshi Gopal, Hanuman, Lord Narasimha, Lord Varaha and others.

The temple remains open from 5 am to 12 midnight. Unlike many other temples, devotees can go behind the idols. All devotees are allowed to go right up to the deities during the Sahana Mela without paying any fees. The Sahana Mela or the public darshan usually follows the Abakasha puja between 7 to 8 am in the morning. Special darshan or Parimanik darshan is when devotees on paying 50 Rupees are allowed right up to the deities. Parimanik darshan happens after the dhupa pujas at around 10 am, 1 pm and 8 pm. At all other times devotees can view the deities from some distance for free. The Rathyatra occurs every year in the month of July.

Naba Kalebara is one of the grandest events associated with the Lord Jagannath. Naba Kalebara takes place when one lunar month of Ashadha is followed by another lunar month of Aashadha. This can take place in 8, 12 or even 18 years. Naba Kalebara means the installation of new deities. Many other festivals like Suna Besha, Snana Purnima, Ratha Yatra and many more are famous too.

The Temperature of Puri usually remains between 25 degree Celsius to 30 degree Celsius. There is no certain time to visit Puri because you will feel great throughout the year as the atmosphere is normal all time, but the best time to visit Puri is from October to February. The tourism department of Odisha is developing many projects so that tourists will be more attracted to visit Puri. There are three and two star ratings Hotels having good facilities. In Puri you can find simple Odiya food with other kind of foods like Chinese and Continental too.