I Am The Only One Of My Sister, Please Save Me: Covid Patient Pleads For Help Hours Before His Death In Viral Video; Watch 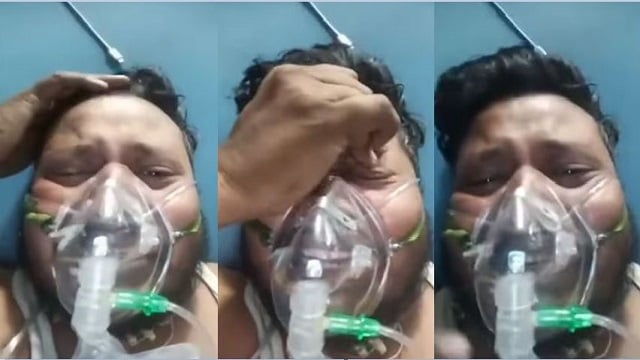 Amid the growing coronavirus cases, COVID patients are neither getting timely treatment nor oxygen-injection system as per requirement. As a result, there are deaths due to lack of oxygen. The local administration is also unable to do anything, due to which the situation is deteriorating. One such incident has come to light at the Amaltas Hospital in Dewas where a youth, who is infected with covid, admitted for treatment released the video and requested Madhya Pradesh Chief Minister Shivraj Singh Chauhan for help. After the video went viral, the voice of the ailing youth reached the administration and was injected.

Name of the youth who sought help from the Chief Minister through social media is Anil Sahni who is admitted in Amaltas Hospital for the last six days and is fighting the battle of life. Due to lack of treatment, Anil made a video addressing Shivraj Singh Chauhan from the hospital itself.

Crying in this, Anil is saying that my uncle, your nephew has been admitted to the ICU of Amaltas Hospital for six days. Struggling with life and death. I do not have parents. I have a 20-year-old sister who has blood cancer. I am the mother and father of that girl. My condition is constantly deteriorating. What would be worse is that the Remedesivir injections that came for me should be sold to someone else. I am struggling with lack of oxygen. Nobody is going to pay attention. My last support is you, please help me, Mamaji. At least save my sister from being orphaned again.

After the video went viral, the administration swung into action. However, it was too late as Anil died hours after he was given the remdesivir injection,

On the other, the hospital authorities claimed that Anil was given treatment as per the protocol and he died because the virus had already affected him around 90 percent. But, in the video it can be seen he is much healthier than what the hospital staff claimed.

Uttarakhand: Houses, Roads Damaged In Uttarkashi’s Kumarada Due To Cloudburst