The world's tallest man, Robert Wadlow, sadly lived for only 22 years. He passed away on July 15, 1940 as a result of a septic blister. 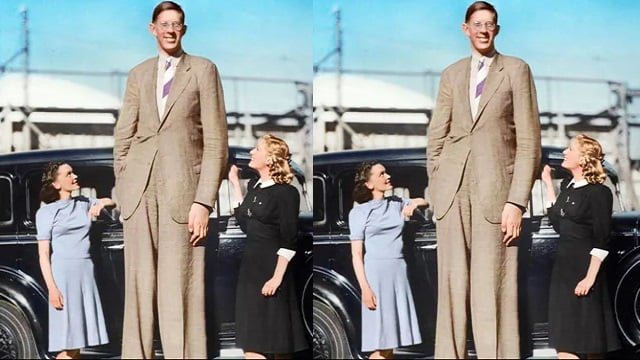 The Guinness book of world records recently tweeted about the world’s tallest man, Robert Wadlow. The post was initially shared by a page named ‘History in Color’. The post included a photo of Wadlow, clicked in the year 1935. Wadlow was also named ‘The Giant of Illinois’.

It has been stated that Wadlow holds the record of being the ‘World’s tallest man’ since the year 1935. Speaking of his body structure, Wadlow measured about 8 feet 11 inches (2.72 m) when he was measured, back in the year 1940. He was born on February 22, 1918, to two regular-sized parents. At the time of birth, Wadlow weighed about 3.85 kg. By the time he turned 5, his height measured around 5 feet 4 inches and he had to don clothes of sizes meant for teenagers. More surprisingly, by the age of 8, he had already outgrown his 5 feet 11-inch father.

The Guinness book of world records shared a picture of the ‘The Giant of Illinois’, along with a caption that read, “Amazing picture of the tallest man who ever lived.” Take a look at the post here:

amazing picture of the tallest man who ever lived https://t.co/gYfRubPf8p

Sadly, Wadlow encountered a premature death at the very young age of 22. This death came as a result of a septic blister on his right ankle. The blister was caused by a brace that was poorly fitted a few days prior to his death. He breathed his last on July 15, 1940, in Michigan. A life-sized statue of Wadlow was made and placed at a College Avenue in Alton, a token of honor for the society’s most famous.