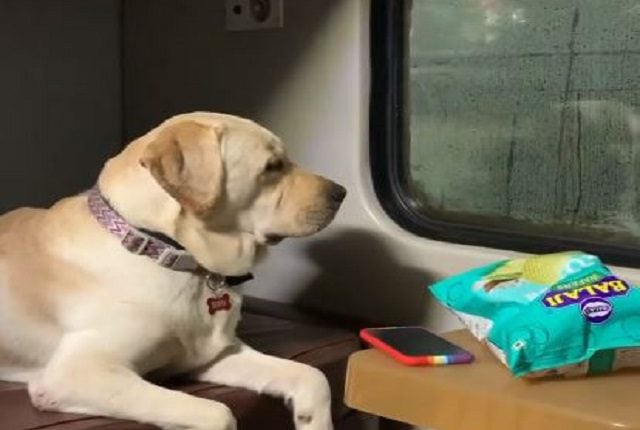 Dogs are one of the best creatures on this planet and they ace the art of making hearts beam with happiness with their gestures, loyalty and of course irresistibly cute looks.

Here is an adorable video where you can see a lab dog Rio’s journey from Mumbai to Bhubaneswar in the train, which has left people amazed and happy.

The video has been shared on the Instagram handle of Rio. The caption reads ” My Journey from Mumbai to Bhubaneswar” with a background music from the song Safarnama from the film Tamasha.

Here is the adorable video:

WATCH: Instant Karma! Thief gets trapped in hole after…

This man from US lived in his office cubicle, Know the…

The video has gone viral and is winning hearts of the netizens. On being shared, the video has garned more than 18,000 likes and 107 comments.

Earlier, another video of a golden retriever has gone viral on social media, wherein the dog walking on a railway platform with his human. While he was scared to see the train arriving, soon after entering the train, he appeared to be inquisitive about everything around. He started sniffing through the entire compartment and walked curiously in the train. As soon as he reached his compartment, he was seen grabbing a spot on the lower birth and sat beside his human’s luggage.

And in another video, a golden retriever dog had also gone viral on social media wherein the dog was seen promoting the vaccination drive. The video featured the furry munchkin getting a vaccination and was doing a happy dance post that was too cute to miss. The video had a text on it which ready as, “Aye yo, just got the vaccine, which means I got them anti-bodyodyodyodyody.”