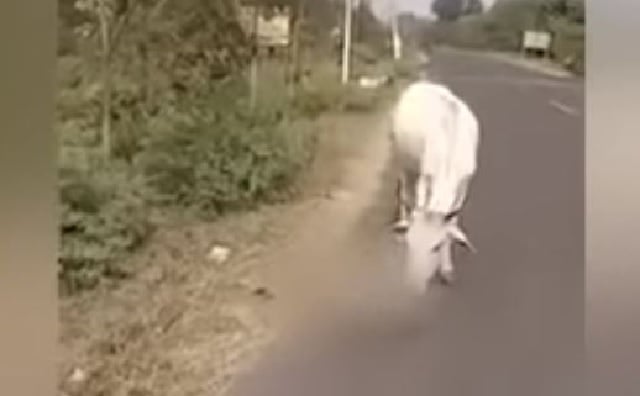 As per researchers at least some animals experience a variety of emotions, including fear, joy, compassion, respect and more. Perhaps this finding has been proved correct in a recent case of Odisha. The incident took place in Angul district.

In a recent incident an ape reportedly met a road mishap near Bauligarh in Banarpal area of Angul district and thus it was killed on the spot. Following the accident the body of the ape was lying on the roadside while hundreds of people passed along the same road and witnessed the corpse but nobody paid heed to the dead animal.

After a while a stray cow came across the ape. Perhaps the cow had not any idea whether by then the monkey was alive or dead. Hence, it started licking and pushing the monkey so that it can regain consciousness. However, since the monkey was already dead by then, there was no response.

As we can see in the video the cow went on licking the ape and pushing it in between. And it also looked at the passers-by as if it was seeking help from the humans to make the monkey awake. It was felt like the cow was asking the passers-by to come near the animal and help them awake the monkey but in vain.

Somebody recorded the whole incident and posted it to social media and the video went viral within no time.

After some time the members of the Go-Rakshya Samiti of Angul reached the spot after getting information from somebody. They lifted the ape and took it to the extreme roadside. They lighted incense stick, put a garland around its neck and also performed other recommended last rites of an animal and buried it.