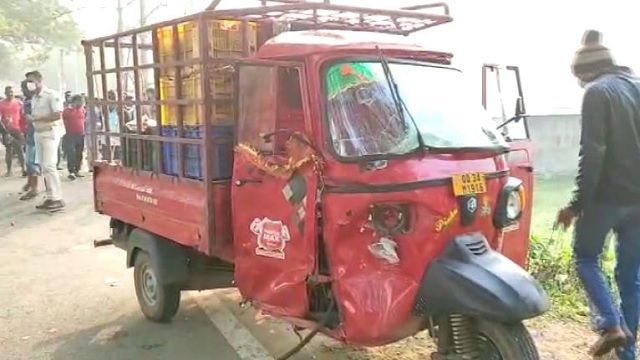 Jajpur Town: In a tragic incident one person died while two others were critically injured in a road accident near Kianali Chhak of Jajpur town in Odisha.

As per reports, a vegetable-loaded auto, and a motorbike had a head-on collision near Kianali Chhak of Jajpur district. Due to the severe impact, one person died while two others are critically injured.

The deceased has been identified as Ananta Kumar Nayak of Routrapur village in Dharmasala. He was driving the bike and died on the spot of the accident.

The other two who have been critically injured were identified as Pappu and Manas and were immediately rushed to the Jajpur District Headquarter Hospital (DHH).

After Manas and Pappu’s health condition deteriorated following the initial checkups they were shifted to Cuttack SCB medical college.

Meanwhile, while the investigation is still underway, the auto driver is reportedly absconding.

3 new police stations to be set up in Bhubaneswar-Cuttack