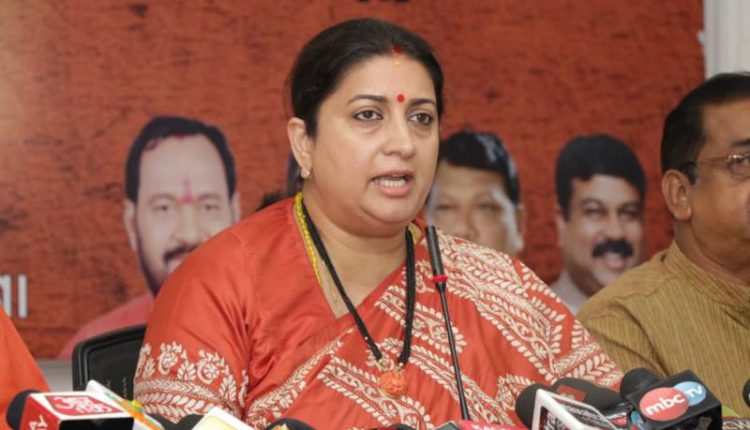 Varanasi: During a visit to Varanasi on Saturday, Union Minister for Women and Child Development Smriti Zubin Irani described the incident in Hathras as painful. “Chief Minister Yogi will do justice in this matter. But Congress leaders Rahul Gandhi and Priyanka going to Hathras is just playing politics.”

Irani says she is confident that the Uttar Pradesh CM will carry out justice in this case. “I have also spoken on the phone with the Chief Minister on this matter.”

Taking a dig at Congress leader Rahul Gandhi, he said, “His attempted journey to Hathras is just playing politics. People of the country and the state understand this. They should go to Rajasthan and take the initiative to bring justice to the victim’s family there, but they are trying to come to Hathras again and again for the sake of votes.”

Elaborating on the incident in Hathras she said, “I do not interfere in the affairs of any state because of constitutional decorum. But I have spoken to Yogi Adityanath on the Hathras case. The Chief Minister has formed the SIT. Action has already been taken against the SP and others on the preliminary report yesterday. Let the SIT report come. After that Yogi Adityanath will take stern action against those who have interfered with the investigation or those who have conspired to deny justice to the victim.”

The Union Minister further said, “Rahul Gandhi has always strived to do politics, but Prime Minister Narendra Modi has been successful in the realm of national policies. I think the people have understood the tactics of the Congress very well. If any leader wants to do politics on any subject, I cannot stop him, but the public understands that the journey to Hathras is for the sake of Rahul’s own politics and not to deliver justice to the victim.”

Samajwadi Party and Congress women activists protested outside the Circuit House in Varanasi about the Hathras case. BJP MLA Saurabh Srivastava came out and tried to assuage the activists. But the protests continued.

Meanwhile, Irani also spoke to the activists at the Circuit House.