With Sukhvinder Singh Sukhu taking oath as the Chief Minister in Himachal Pradesh, the Congress has tried to emerge out of the shadows of Virbhadra Singh's family. 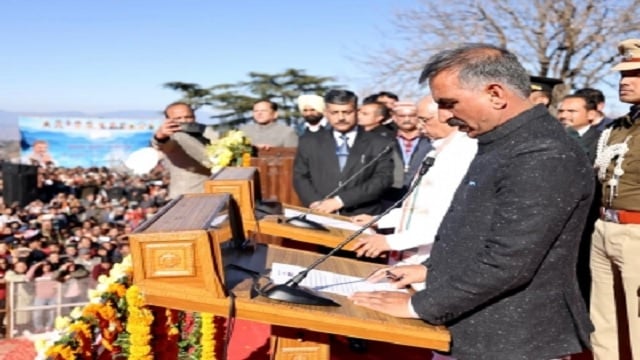 New Delhi:  With Sukhvinder Singh Sukhu taking oath as the Chief Minister in Himachal Pradesh, the Congress has tried to emerge out of the shadows of Virbhadra Singh’s family that had been at the forefront in the party’s state politics for decades.

Sukhu’s swearing-in ceremony was attended by senior Congress leaders including party chief Mallikarjun Kharge, Rahul Gandhi, Priyanka Gandhi Vadra. He said, “the government will try to fulfill all the promises made at earliest.”

The elevation of Sukhu is seen as the party’s efforts to cull nepotism and the charge of promoting families.

The newly sworn-in Himachal chief minister comes from a very humble beginning and has risen from the ranks. That is why the party chose Sukhu in place of Pratibha Singh, who is from the royal family and wife of Late Virbhadra Singh, said sources.

With no political dynasty, but wide organisational experience, four-time Congress legislator Sukhvinder Singh Sukhu, 58, throughout his political career was not on the same page with the party’s tallest leader Virbhadra Singh.

Four-time legislator Mukesh Agnihotri, 60, took the oath of office as the Deputy Chief Minister at a ceremony that lasted less than 10 minutes. Both took the oath in Hindi.

Anand Sharma in his tweet mentioned the humble beginning, “Congratulations to Sukhvinder Sukhu on becoming the next Chief Minister of Himachal Pradesh. Richly deserved recognition of his life long commitment to the Congress party and acknowledged contribution.”

Sharma said he was grateful that the party leadership had taken a democratic decision and chosen the one who has risen from the ranks.

Odisha: Body recovered from temple in Ward No. 61 of Bhubaneswar