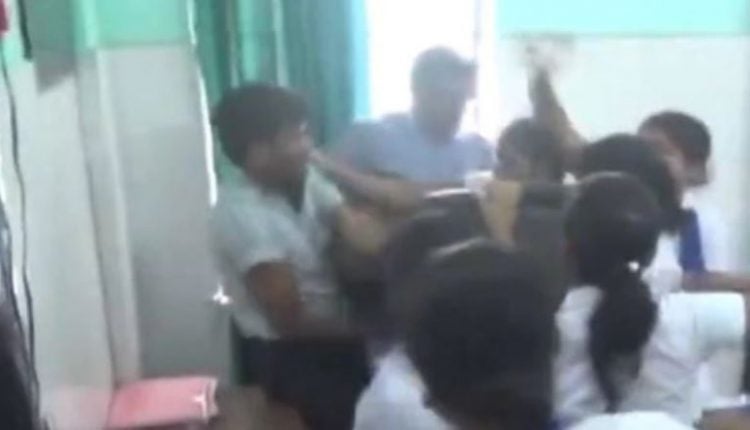 Patna: A group of nursing students beat a doctor black and blue for allegedly molesting a trainee in Katihar district of Bihar.

In a video which has gone viral on the social media, it is seen that the girl students, who were undergoing Auxiliary Nurse Midwives (ANMs) training, protesting against the doctor and then beating him up with slippers.

The ANM students thrashed the doctor, an eye specialist, after a trainee who was present in a training session told one of her colleagues that he “tried to eve-tease” her.

Later, the doctor was summoned by the hospital’s civil surgeon. When the accused doctor was trying to put forward his version of the incident before the civil surgeon, the trainee ANMs sought immediate action against him.

Soon after, as many as 60 ANM trainees entered the room where the civil surgeon was speaking to their representative and started beating the accused doctor. However, the accused doctor managed to flee the spot.

#WATCH: Nurses of a hospital in Katihar beat up a doctor who allegedly molested a female medical staff. #Bihar pic.twitter.com/CgoEiN97VA