Watch: Andhra CM sister Sharmila’s car towed away while she was in it 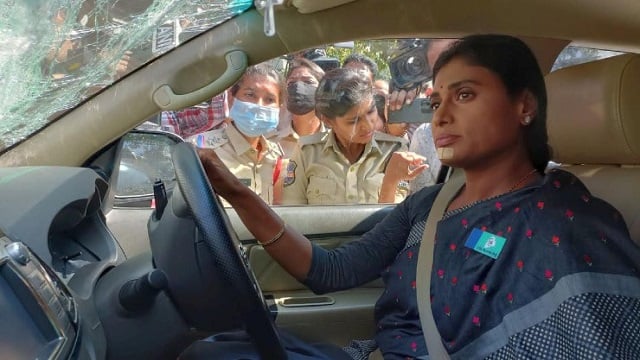 Hyderabad: In a dramatic scene, YSR Telangana Party chief YS Sharmila, Andhra Pradesh Chief Minister YS Jagan Reddy’s sister was towed away by the police as she participated in a protest against the Telangana CM K Chandrashekar Rao’s government.

The high drama took place on the streets of Hyderabad’s streets on Tuesday.

YS Sharmila was also detained from Somajiguda after she tried to go to Pragathi Bhavan to gherao the chief minister’s residence.

As soon as she sat in her car, police brought a crane and dragged the vehicle through the streets of Hyderabad.

#WATCH | Hyderabad: Police drags away the car of YSRTP Chief Sharmila Reddy with the help of a crane, even as she sits inside it for protesting against the Telangana CM KCR pic.twitter.com/ojWVPmUciW

The windshields of the Toyota Fortuner were being smashed by activists of the of the Bharat Rashtra Smithi (BRS).