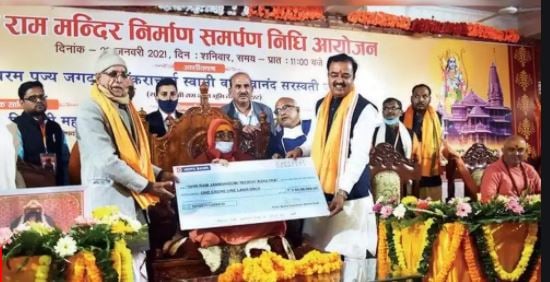 Prayagraj (Uttar Pradesh): Uttar Pradesh Deputy Chief Minister Keshav Prasad Maurya, has handed over his 30-month salary for the construction of the Ram temple in Ayodhya.

The amount was handed over to the general secretary of Sri Ram Janmabhoomi Teerth Kshetra Trust, Champat Rai, and member Swami Vasudevanand Saraswati, on Saturday.

Stray dogs gouge out eyes from human body in Ayodhya…

Ayodhya Deepotsav: Over 9 lakh diyas lit along Saryu in…

Ayodhya is not the same without Ram, says president Kovind

Talking to reporters, Maurya said, “I am a Ram devotee first and the deputy chief minister of the state later.”

The Deputy Chief Minister also handed over a cheque of Rs 1.10 crore on behalf of PWD employees of the state for the temple construction.

He said, “The cooperation of the entire nation is being sought for the construction of Ram temple as five generations have sacrificed their lives in the temple movement. In such a situation, this cooperation is being taken from everyone.”