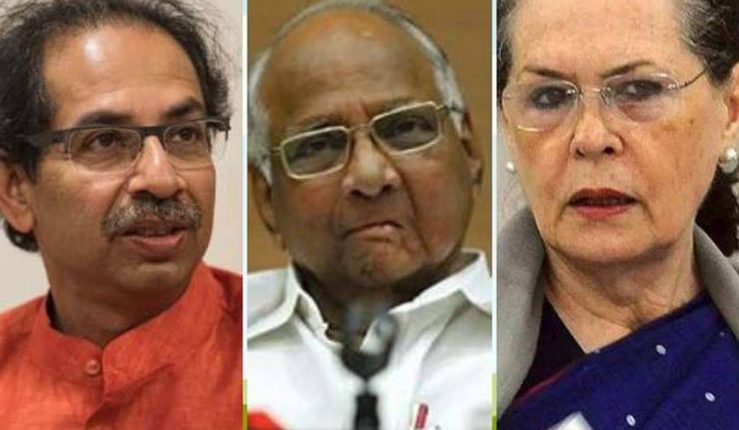 New Delhi/Mumbai: Meetings between the Congress, Nationalist Congress Party (NCP) and Shiv Sena to arrive at a consensus on the common minimum programme (CMD) to form the government in Maharashtra have gathered pace, with the three parties now set to meet Governor Bhagat Singh Koshyari together on Saturday over the plight of the farmers hit by rain.

While the political activity is moving fast in Mumbai, giving indications of government formation in Maharashtra, the developments in Delhi have slowed down, sources said.

Though continuing with the talks, the Congress still has apprehensions about various issues regarding a tie-up with the Shiv Sena.

Top sources within the Congress told IANS that clarity on the tie-up will be evident only after NCP chief Sharad Pawar meets Congress interim President Sonia Gandhi in the national capital on Sunday. The meeting is scheduled for 4 p.m.

The state Congress leaders are excited about the formation of government in Maharashtra, but in Delhi the party is still thinking of possible ramifications of supporting a party with strong Hindutva ideology, the sources said.

The party is wary of the tantrums of the Shiv Sena, and therefore the deal would depend on the deliberations between Sharad Pawar and Sonia Gandhi.

Earlier, NCP President Sharad Pawar said in Nagpur on Friday that the proposed Shiv Sena-NCP-Congress government will be formed soon and serve its full five-year term.

While speaking with mediapersons, Pawar dismissed the possibility of holding mid-term elections in the state, which is now under President’s Rule.

“The three parties sincerely want to form a stable and sustaining government with emphasis on development and progress of Maharashtra on a common minimum programme,” Pawar said.

He added that presently the three parties are finalising their CMP with a series of discussions and the final roadmap would emerge only after a consensus.

To a question on whether the Sena would be willing to compromise on its Hindutva credentials vis-a-vis the Congress-NCP’s secular ideals, Pawar said that Congress-NCP always speaks of secularism, but “that doesn’t mean we are against anybody else”.

On the power-sharing formula and who will hold the Chief Minister’s post, Pawar said everything will fall into place once the CMP is finalised and accepted by all the parties.