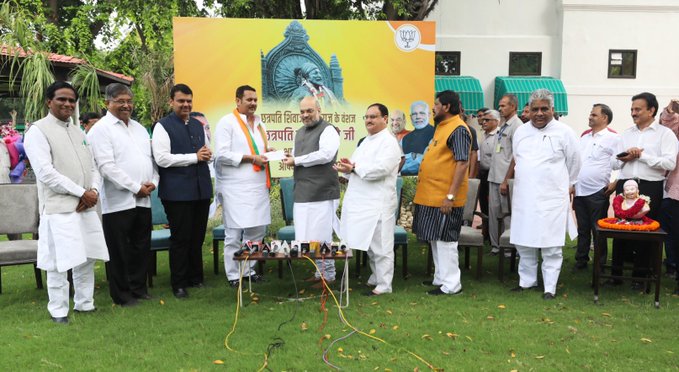 New Delhi : In a major jolt to the NCP ahead of the Maharashtra Assembly elections, the party’s senior leader Udayanraje Bhosale on Saturday resigned as a Lok Sabha MP and joined the BJP saying he was inspired by Prime Minister Narendra Modi’s leadership.

He then arrived at the residence of Bharatiya Janata Party President and Union Home Minister Amit Shah, where he formally joined the BJP in the presence of Working President J.P. Nadda, Maharashtra Chief Minister Devendra Fadnavis and several other senior leaders.

After joining the BJP, Bhosale, a descendant of Chhatrapati Shivaji Maharaj, said: “I am inspired by the works and leadership of Modi, Shah and the BJP. I am happy to see that the BJP was following the paths of Shivaji Maharaj to strengthen the country.”

Bhosale also hailed the Modi government for revoking Article 370 from Jammu and Kashmir and said: “What nobody thought, they made it real by handling the sensitive matter in a very mature way to strengthen the country.”

He added that the people of the country were joining the BJP because of the leadership in the party and its ideologies.

Bhosale’s resignation is a jolt to the 20-year-old Nationalist Congress Party (NCP) whose many prominent leaders, including some former Ministers, have quit the party to join the BJP and Shiv Sena ahead of the state’s Assembly elections.

His cousin Shivendrasinh, who represented the Satara seat for the NCP in Maharashtra Assembly, had also joined the BJP on July 31 this year.

Shah, while welcoming Bhosale, said: “The BJP and the Jana Sangh has always followed the ideologies of Shivaji Maharaj. And it was great that one of his family members has joined the party.”

Praising Bhosale for resigning as an NCP MP just four months after the Lok Sabha elections, Shah said: “He resigned as an MP within four months on moral grounds to join the BJP, which is a matter of pride.”

The Union Home Minister also stressed that the BJP, under the leadership of Modi in the Centre and Fadnavis in the state, will improve its tally in the Maharashtra Assembly elections scheduled later this year.

“I have toured the state recently and I am assured that the BJP will improve its tally in the assembly elections and will win three fourth majority,” he said.

Earlier, he was a legislator and served as the Revenue Minister for a year in the erstwhile Shiv Sena-BJP government between 1995-1999.

However, shortly before the 2009 Lok Sabha elections, he quit the BJP, following certain differences with state leaders to join the NCP and remained among the most trusted aides of NCP chief Sharad Pawar.

When he was a Minister, he had been accused in the murder case of NCP activist Sharad Leve in 1999, but was later acquitted by the courts.

In the 2014 elections, the BJP came to power by winning 122 seats in the 288 member Assembly, while the and later allied with Shiv Sena won 62 seats.

The Congress and the NCP bagged 42 and 41 seats, respectively. The two parties were now looking for a comeback in the state.