Nadella, who met Modi in the New Delhi on Wednesday, described his meeting as an "insightful" one, especially around the India Stack. 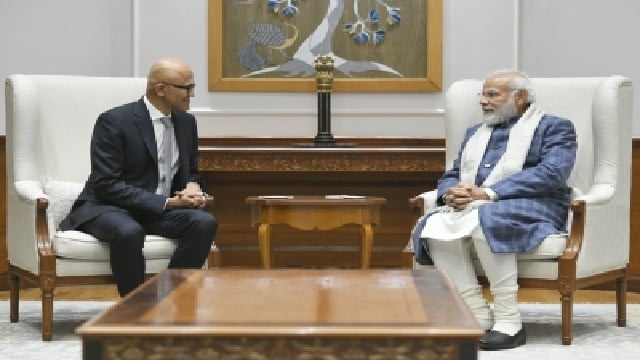 Bengaluru/New Delhi: Prime Minister Narendra Modi’s digital vision and all the programmes that have been launched around that vision are creating amazing digital public goods, which are the greatest contributions to the world, Microsoft Chairman and CEO Satya Nadella said on Thursday.

Nadella, who met Modi in the New Delhi on Wednesday, described his meeting as an “insightful” one, especially around the India Stack.

India Stack is a set of open APIs and digital public goods that aim to unlock the economic primitives of identity, data, and payments at population scale.

“I had an opportunity to have a conversation with PM Modi about this at length. The magic of India Stack is unlike anything that I have seen anywhere in the world, which is perhaps the greatest contribution that India can make to the world,” Nadella told the gathering here during Microsoft’s ‘Future Ready Technology Summit’.

The India Stack is widening access to financial services in an economy where retail transactions are heavily cash-based.

The work in the field of digital public goods is amazing and it is “inspiring to see the deep focus on sustainable and inclusive economic growth led by digital transformation” in the country, he added.

After meeting PM Modi, Nadella tweeted that “we’re looking forward to helping India realise the Digital India vision and be a light for the world”.

Nadella was in the country on a four-day visit, and also met External Affairs Minister S. Jaishankar in the capital on Wednesday.

Sony-Honda unveil their new EV- Afeela, deliveries of the cars to begin from 2026