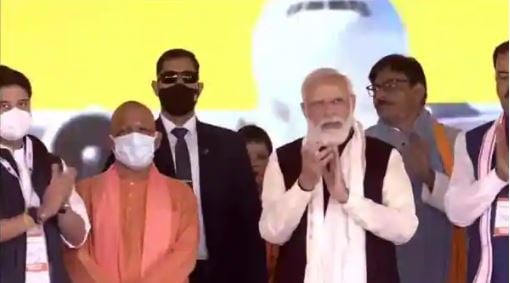 The airport is spread over more than 1300 hectares of land and the completed first phase of the airport will have a capacity to serve around 1.2 crore passengers a year and work on it is scheduled to be completed by 2024.

This project will significantly boost commerce, connectivity and tourism,” the PM tweeted.

Tomorrow, 25th November is a major day for India’s and Uttar Pradesh’s strides in infra creation. At 1 PM, the foundation stone of the Noida International Airport will be laid. This project will significantly boost commerce, connectivity and tourism. https://t.co/8sSa8R1aFl

Chief Minister Yogi Adityanath said he expects investments of over ₹ 10,000 crore after the first phase and up to ₹ 35,000 crore once the airport is fully built.

Noida international airport will be completed as per the scheduled deadline of 2024 and create huge employment opportunities in the state, thereby changing the business dynamics of this region,” he added.

Union Civil Aviation Minister Jyotiraditya Scindia has claimed the Noida airport will be Asia’s largest and will generate employment opportunities for more than one lakh people.

Civil Aviation Minister added, “The Jewar airport will host multi-modal connectivity and bring in investments worth 60,000 crore to UP.”