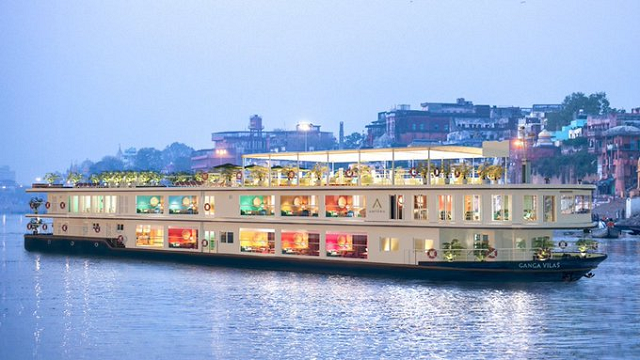 He will also lay the foundation and inaugurate several projects of inland waterways in Bihar, West Bengal and Assam on this occasion.

Divisional Commissioner Kaushal Raj Sharma said, “The Prime Minister will flag off the Ganga Vilas cruise through video-conferencing and also inaugurate tent city on the bank of the Ganga on Friday.”

Chief Minister Yogi Adityanath said that Varanasi is famous as the cultural and spiritual capital of the world and under the leadership of Prime Minister Narendra Modi, Kashi has established itself on the global stage while maintaining its ancient soul.

A grand function will be organised at Ravidas Ghat where Chief Minister Yogi Adityanath and Union Ports, Shipping and Waterways Minister Sarbananda Sonowal along with other ministers and dignitaries will also be present.

As curtain-raiser for the historical event, the Union Ministry of Culture hosted a grand musical concert, ‘Sur Sarita – Symphony of Ganga’, at the Kashi Vishwanath Corridor where renowned musician and singer Shankar Mahadevan enthralled the audience with his rendition ‘Kartavya Ganga’ on Thursday evening.

Folk musicians from Assam, Bihar and Bengal performed to pay homage to the rivers Ganga, Yamuna and Brahmaputra.

A mobile science exhibition on Ganga, ‘Arth Ganga’, organised by the National Council of Science Museums (NCSM), Kolkata under the Union Ministry of Culture, was also flagged off from Varanasi before the concert.

Apart from flagging off the cruise and inaugurating the tent city, the Prime Minister will also inaugurate Haldia multi mod terminal in West Bengal, four floating community jetties at Saidpur, Chochakpur, Zamania in Ghazipur and at Kanspur in Ballia district. Besides, foundation stone will be laid for the five community jetties at Digha, Nakta Diyara, Barh, Panapur in Patna and Hasanpur in Samastipur district in Bihar by the Prime Minister.

He will also inaugurate Maritime Skill Development Centre for North East at Guwahati.