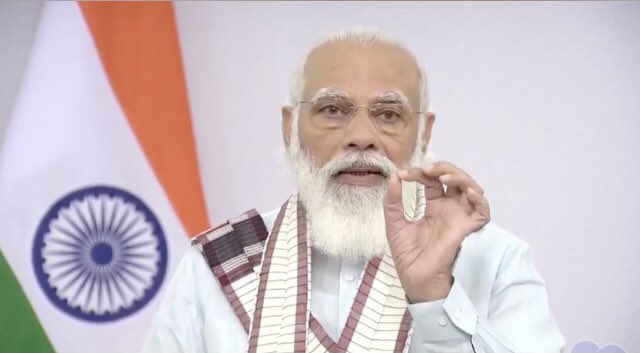 New Delhi: Prime Minister Narendra Modi on Tuesday said the lockdown may have ended but the virus is still out there and urged the people not to be complacent and drop their guard in the fight against Covid-19.

The PM emphasized that the government is working on a blueprint to make the Covid-19 vaccine, when it is ready, available to each and every citizen.

In an address to the nation, the PM said he recently saw many pictures and videos where it is clearly seen that people are not taking precautions to contain the spread of the virus. “This is not right’, he said.

Five-tier security in Chennai ahead of PM’s visit

Mumbai’s first death due to Delta Plus Covid variant

Centre may allow mixing of Covishield and Sputnik vaccines

Modi emphasized that India is doing better than many developed countries in the fight against the coronavirus. He said the fatality rate in India is 83 out of every 10 lakh population, whereas it is more than 600 in countries like the US, Brazil, Spain, Britain. He reiterated that till a vaccine is developed against the virus, people should not drop their guard and indulge in reckless behaviour.

On the development of the vaccine, the PM said the scientists of the country are working on a war footing to develop a vaccine and a few candidates are in an advanced stage of trials.

The PM added that initially in the US and many countries in Europe coronavirus cases dropped very sharply, but they begin to rise again at an alarming speed. Citing Sant Kabir, Modi said that until the vaccine becomes available people should remain vigilant against the spread of the virus.