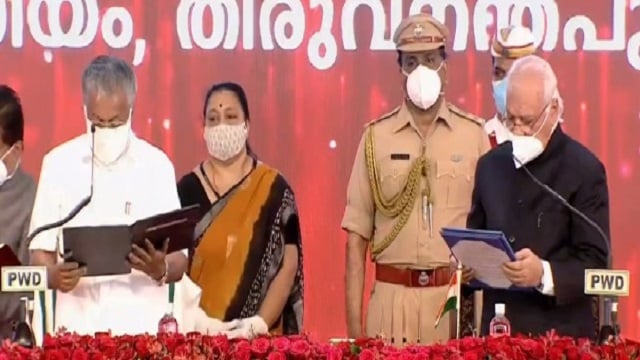 According to reports, more than 75% of new cabinet became ministers for the first time. The CPI-M led Left Democratic Front has won 99 seats in the 140-member assembly.

The oath taking ceremony was held at the Central Stadium at 3:30 PM where strict protocols have been followed. It had been decided that the swearing-in will be conducted physically in the presence of 500 people.

An order had been issued by the Chief Secretary regarding the oath-taking ceremony that stated entry to the venue shall be strictly through an entry pass and the entry/exit shall be regulated by maintaining social distancing.

The order also said that the seating arrangements including at the dais shall be made as per COVID-19 protocol. Entry shall be allowed to only those persons having RT-PCR/TRUNAT/RT-LAMP negative results obtained within 48 hours or on the production of a final certificate of COVID vaccination. The order further stated that a testing facility for COVID-19 shall also be arranged near the venue.