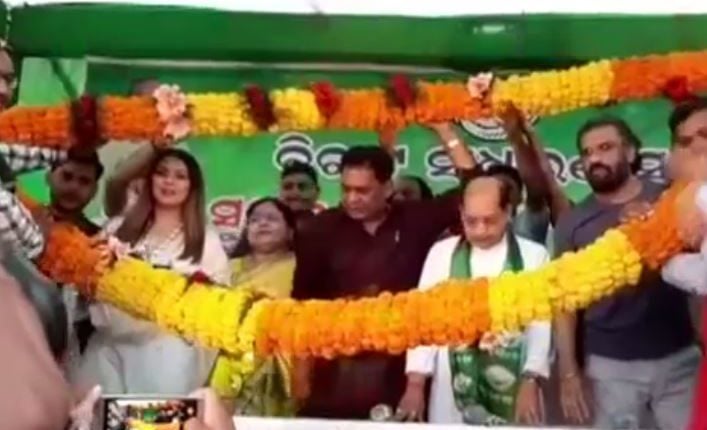 Bargarh: With political parties roping in more and more film stars to woo voters with every passing day of the ongoing general election campaign in the State, the ruling BJD launched Bollywood star Suniel Shetty and Mahima Chaudhary in the fight yesterday.

Suniel, the action star of yesteryear, who has a sizeable fan base across the State also was seen accompanying senior BJD leader and party’s Lok Sabha candidate from Bargarh Prasanna Acharya and Jharsuguda MLA candidate Naba Das.

Along with Mahima, Suniel was seen asking people to vote for the conch party for the development of the State during a rally after attending a public gathering in Bargarh.

On the other hand, BJP is not lagging behind in exploiting star power for the poll campaign and the Ollywood heartthrob Babusan has been engaged on campaign at around three places in Ganjam district today.

As per the lotus party schedule, Babusan will attend its Vijay Sankalp Samavesh at Patharakata Ground of Nagleswar village in Khallikote at 10 am today and then another at Hinjili NAC area at 12 noon followed by the last one at Mamudiha Ground in Aska NAC at around 1.30 pm.