Department of Personnel and Training (DOPT) by way of a notification announced on Monday that former secretary of Ministry of Corporate Affairs (MCA) will be appointed as Chairman of IFSCA for a period of three years. 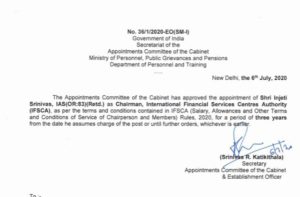 Srinivas is 1983 batch IAS officer from Odisha cadre and served at MCA for nearly 3 years. Before that he served as secretary at Department of Sports as well as Director General of Sports Authority of India (SAI).

(With inputs from livemint)