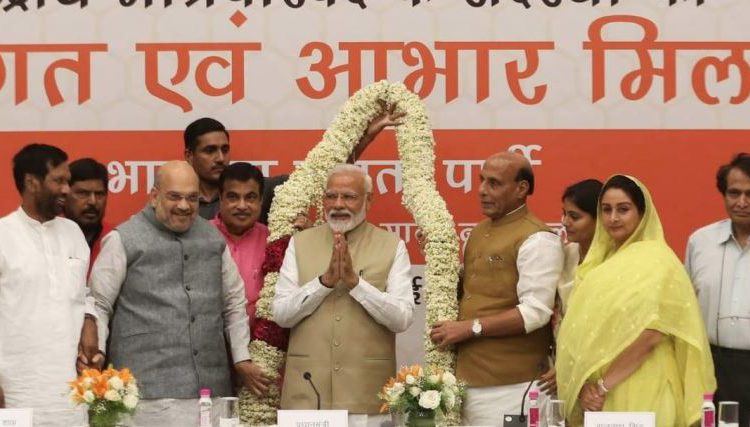 New Delhi: Prime Minister-elect Narendra Modi will take the oath of office and secrecy with his council of ministers on 30 May, according to a statement from the Rashtrapati Bhavan released on Sunday.

The President will administer the oath of office and secrecy to the Prime Minister and other members of the Union Council of Ministers at 7 pm on May 30, 2019, at Rashrapati Bhavan

“The President will administer the oath of office and secrecy to the Prime Minister and other members of Union Council of Ministers on 30 May at Rashtrapati Bhavan,” said an official statement from the president’s office on Sunday.

Sanjay Dutt wishes the ‘man who changed the outlook of…

President Murmu, PM Modi Wish People Of Odisha On The…

Respect for women is an important pillar of India’s…

The NDA had met on Saturday and unanimously elected Modi as the leader of the parliamentary party. He was then authorized to stake claim to form the government.

According to reports, BJP president Amit Shah, elected to the Lok Sabha from Ahmedabad, could be given the home ministry portfolio, with incumbent Rajnath Singh being moved to defence and Nirmala Sitharaman, who has held the defence portfolio, being shifted to external affairs given that incumbent Sushma Swaraj decided against contesting the elections.

Similarly, Dharmendra Pradhan and Ravi Shankar Prasad are being expected to continue in the second Modi cabinet. It is also being speculated that Union Textiles Minister Smriti Irani, who defeated Congress president Rahul Gandhi from Amethi Lok Sabha Constituency, could be given an important portfolio.

Monsoon continues its journey amidst lack of cross-equatorial flow