Videos of the man, wearing a wall clock around the neck, have gone viral as he throws money from flyover in Bengaluru 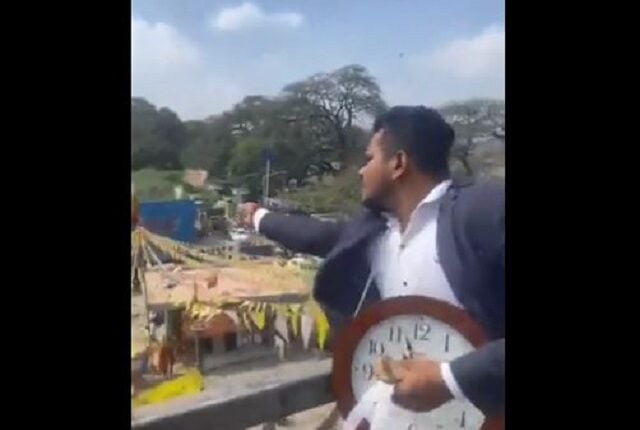 Bengaluru: Residents in Bengaluru were taken by suprise when an unknown man showered Indian currency notes from the Mysuru Road flyover in Kalasipalya locality of the state capital.

The walkers and vehicle riders couldn’t believe it when they saw currency notes of total of Rs 3000 the denomination of Rs 10 started falling at their feet.

The development created a huge commotion in the usually crowded Kalasipalya locality. The notes currency notes were thrown from both the sides of the flyover.

The people went ahead in a mad rush to pick up the currency notes and created a traffic jam. The traffic policemen present at the spot were clueless.

Deputy Commissioner of Police (DCP) (West) Lakshman Nimbaragi stated, “We don’t know much about the incident and once the inputs are gathered we will share the information.

It’s literally raining money in Blr😂Unidentified man in #Bengaluru showers #money from KR Market flyover. Comes in with a bag of money consisting of 10 rupee currency, throws notes down the flyover and leaves. People swarm in large numbers to collect the money. pic.twitter.com/rbHB0ugsiR