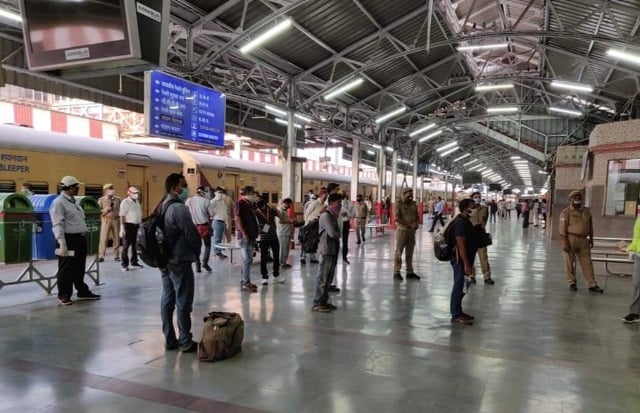 New Delhi: The Indian Railways has issued guidelines for the the operation of ‘Shramik special trains’, deployed to bring back home people stranded in different parts of the country due to lockdown following the coronavirus outbreak.

The special trains have started ferrying stranded migrant workers, students, pilgrims, tourists, and other persons to their respective destinations.

The Special trains are running on the request of both the concerned State governments for sending and receiving stranded persons.

Railways and State governments will appoint senior officials as Nodal Officers for coordination and smooth operation of the trains.

As per the guidelines, the passengers have to be screened by the sending states and only those found asymptomatic would be allowed to board the train.

Meals and drinking water will be provided by sending states at the originating stations. In case of longer route, the Railways will provide a meal enroute during the journey.

On arrival at the destination, passengers will be received by the State Government, who would make all arrangements for their screening, quarantine if necessary and further travel from the Railway Station.

The Railways said, all other passenger train services will remain suspended and Railways is only accepting passengers brought and facilitated by State Governments.

No other group of traveller or individual are allowed to come to station to travel and no tickets are being sold at any station, it added.

Notably, passenger trains have been suspended since March 22. However, the Centre has allowed freight and special parcel trains for the supply of essentials. The Centre also allowed special trains for Indian Army personnel, citing national security consideration.