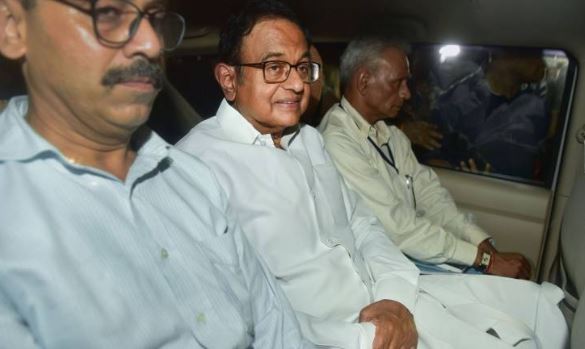 73-year-old Chidambaram was produced before Special Judge Ajay Kumar Kuhar, who heard the arguments of the CBI and Chidambaram’s counsel for over one-and-a-half-hour.

CBI has sought 5-day custody of Chidambaram for interrogation in the case pertaining to alleged irregularities in the grant of foreign investment clearances to INX Media when he was the Finance Minister.

Solicitor General Tushar Mehta, representing CBI, said, Chidambaram was in conspiracy with others in the INX Media scam. He also claimed that the former minister was not cooperating in the investigation.

The Solicitor General said, it is a serious and monumental case of money laundering. He also said Chidambaram’s custodial interrogation was necessary to unearth the larger conspiracy and he is required to be confronted with documents.

Chidambaram’s advocates opposed the CBI plea on the ground that all the other accused, including his son Karti, have already been granted bail in the case. Senior advocate Kapil Sibal, appearing for Chidambaram contended that Chidambaram was asked 12 questions and he had already answered six of them previously.

The former Finance Minister was arrested by CBI last night from his Jor Bagh residence here.

The CBI was looking for Chidambaram since Tuesday after his anticipatory bail application was rejected by the Delhi High Court. The Congress leader moved Supreme Court seeking protection from arrest in the INX media cases. However, he failed to get any immediate relief from the apex court which said it will hear his plea on Friday.

The CBI had registered an FIR in May 2017, alleging irregularities in the Foreign Investment Promotion Board (FIPB) clearance granted to the INX media group for receiving overseas funds of 305 crore rupees in 2007 during Chidambaram’s tenure as finance minister.

Over 10 injured as school van overturns in Balangir