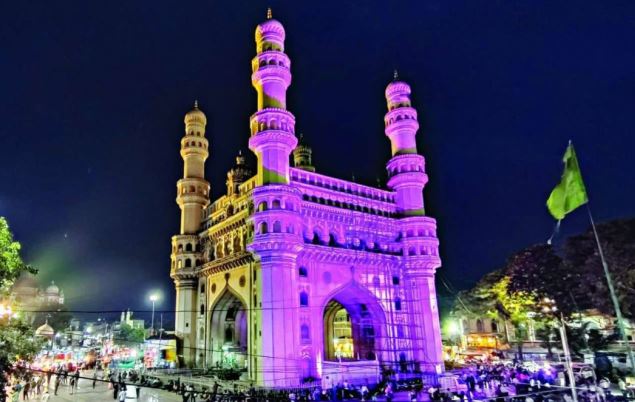 Hyderabad: Historical monuments and prominent buildings in Hyderabad were illuminated in pink to mark the launch of month-long breast cancer awareness programme.

The historic Charminar, the symbol of the city, the Buddha statue in Hussain Sagar lake and the KIMS Hospital buildings were lit in pink on Wednesday night for the pink ribbon campaign aimed at creating awareness on the importance of early detection of breast cancer.

This is the 10th year that Ushalakshmi Breast Cancer Foundation (UBF), a not-for-profit breast cancer charity, has illuminated the key landmarks as part of its consistent and innovative initiatives to create public awareness.

This year, Ravindra Bharati and Prasad IMAX were not illuminated as there is no public gathering at these places due to the Covid-19 pandemic, Dr. P. Raghu Ram, founder, CEO and Director, Ushalakshmi Breast Cancer Foundation told IANS.

“Hyderabad is the only city in Asia to have so many prominent buildings and historic monuments turn pink in one night in support of breast cancer awareness,” he said.

October is recognised as international breast cancer awareness month the world over.

Prominent monuments and buildings that also turn pink during the month include the White House, the Empire State Building, the Buckingham Palace, the Tower of London and the Eiffel Tower.

The idea started 2000 when the Estee Lauder group of companies illuminated their buildings world over in pink to mark the beginning of international breast cancer awareness month.

Illumination of prominent buildings in pink is just one way to attract the attention and curiosity of people and raise the awareness about importance of early detection, said Dr Raghu Ram, who was awarded Padma Shri in 2015.

During the month, the foundation spread the message of hope, survival and courage of those who have fought breast cancer, and remind people that women over 40 must get themselves an annual screening mammogram to detect breast cancer early.

“As breast cancer cannot be prevented, the only way to fight breast cancer is early detection,” said Dr Rahu Ram, who is the director of KIMS-Ushalkashmi Centre for Breast Diseases, Hyderabad.

In India, over 162,000 women are newly diagnosed with breast cancer every year – with the staggering number showing that it has overtaken cervical cancer to become the most common cancer affecting women.

More than 60 per cent present in advanced stages due to lack of awareness and absence of a population-based screening programme. Contrary to the western world where breast cancer is common after the age of 50 years, the highest incidence of breast cancer in India is between the ages of 30-50 years – at least a decade earlier.

Through the consistent innovative and pioneering initiatives of the Foundation over the last 13 years, breast cancer is no longer a “closet issue” in this region. It is a much commonly discussed topic, thus bringing about the much needed awareness resulting in more lives being saved.

However, for the first time, the Foundation will not be holding the pink ribbon walk, the signature event of the awareness campaign, due to the pandemic.