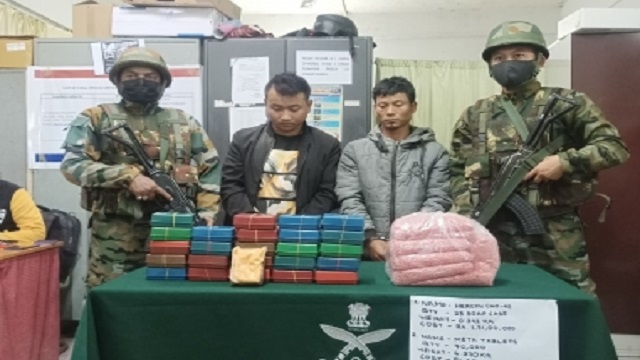 Aizawl: Security personnel in Mizoram have seized heroin and highly addictive methamphetamine tablets valued at over Rs 25 crore and arrested two persons in this connection, officials said on Wednesday.

Assam Rifles officials said that the para-military troopers and special narcotics police station, acting on a tip off, recovered 342 gm heroin valued at Rs 1.71 crore and 70,000 methamphetamine tablets, valued at over Rs 23.33 crore from Sialsuk areas in Aizawl district on Tuesday night.

The Assam Rifles personnel and the special narcotics wing officials intercepted a vehicle at a check post and recovered the drugs from the car.

Mizoram: Head of one of the World’s largest families…

Two drug peddlers were also arrested as they were illegally carrying the drugs after being smuggled from Myanmar.

Assam Rifles officials admitted that ongoing smuggling of drugs is a major cause of concern for the state of Mizoram, which shares a 510 km unfenced border with Myanmar.