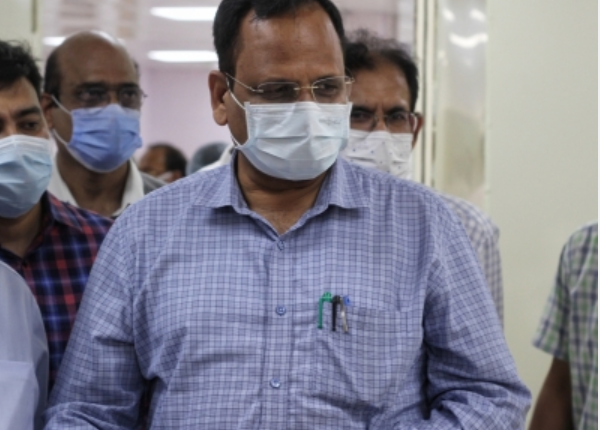 New Delhi: Delhi is expected to record 10,500 Covid-19 cases with a positivity rate between 17 and 18 per cent on Friday, state Health Minister Satyendar Jain said.

Meanwhile, Delhi Chief Minister Arvind Kejriwal has written to Lieutenant Governor Anil Baijal over easing some of the Covid-19 related restrictions like the weekend curfew and odd-even system of opening shops as the Covid-19 positivity rate in the national capital has registered a dip, according to an official.

However, private offices will continue to operate with 50 per cent capacity until further orders, the Delhi government official said.

The weekend curfew in the national capital came into force on January 7 after 17,335 fresh Covid cases were reported in the city, which was the highest in the last eight months, with the positivity rate increasing to a sharp 17.73 per cent.

The curfew announced by the Delhi Disaster Management Authority (DDMA), depends on the severity of the infection rate, which is decided under the Graded Action Response Plan (GRAP).

Under the GRAP, it is decided as to which activities would be allowed under what circumstances in case of a surge in Covid-19 cases.

There are four levels of colour-coded alerts namely, yellow, amber, orange and red.

Delhi has been under level 1 or yellow alert restrictions since December 28, 2021.

On Thursday, Delhi witnessed a dip in the number of single-day cases after as many as 12,306 people tested positive for Covid-19, according to the health bulletin data. On Wednesday, a total of 13,785 Covid-19 cases were logged in the national capital.

The cumulative caseload of Delhi currently stands at 17,60,272. The case positivity rate of the national capital was reduced to 21.48 per cent on Thursday from 23.86 per cent on the preceding day.

Having Sore throat, Follow these Ayurvedic Remedies to ease the pain