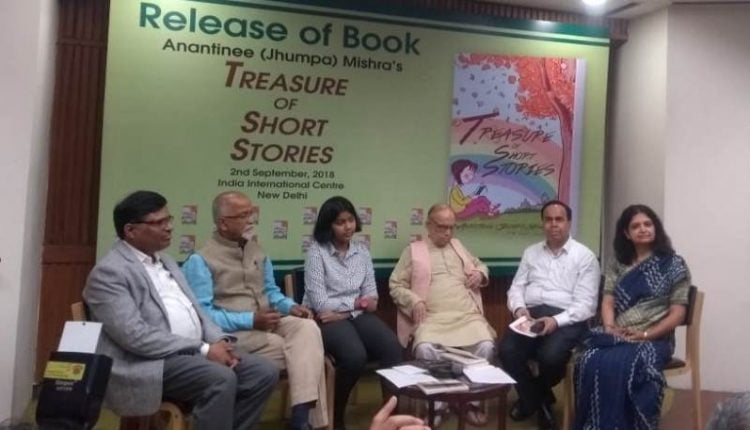 The ‘Treasure of Short Stories’, which has been published under the banner of Invincible Publishers, is an anthology of tales written by the ten-year-old author. Partially inspired by personal experiences, she has given them for infused with the flavour of her imagination and a keen observation of the world around her.

Through her international and expressible writing, she hopes to invoke certain deep feelings in her readers that can nudge them onward in the direction of becoming better, more self-aware   human beings.

The many tales in the is anthology deals with the important issues of bullying, standing up for oneself and one’s loved ones, accepting oneself, issues of dignity , courage and friendship – all from the author’s perspective.

The book is a delightful read for children and young adults alike.

Currently she studies in sixth standard in Apeejay School, Saket in New Delhi.

The event was graced by the esteemed presence of Satyananda Mishra, the former Chief Information Commissioner and Chairman of the Multi-Commodity Exchange of India Ltd (MCX), Suresh Chandra Panda, former CEO of Prasar Bharati and Special Secretary and Financial Adviser in Affairs and the present senior Advisor at Indian International Institute of Democracy and Election Management (IIIDEM) under the Election Commission of India, Simanchala Dash, the present Principal Director in Enforcement Directorate and Anita Paul, former Principal of Apeejay School, Saket.

Anantinee book was released only two days after she received special felicitation at the Delhi Book Fair for her penmanship.