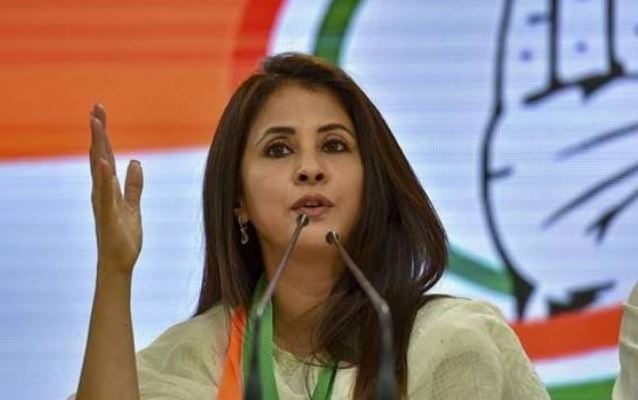 Mumbai: Caught in a web of intra-party politicking, Bollywood actress Urmila Matondkar abruptly quit the Congress on Tuesday, alleging ‘betrayal’ by the party.

“I hereby resign from the Indian National Congress (INC) as a member and from any post held in the INC. I thank you for giving me the opportunity to work for INC,” said Matondkar in a terse letter to interim Congress President Sonia Gandhi dated September 7.

She said the first thoughts of resigning from the party came when — despite her repeated efforts — no action was taken in pursuance of her explosive letter dated May 16 to the former Mumbai Congress President Milind Deora, which was ‘leaked’ in early July.

“Thereafter, to my utter dismay, the said letter containing privileged and confidential communication was conveniently leaked to the media, which according to me was an act of blatant betrayal,” Matondkar said.

She claimed that nobody from the party was apologetic for the leak of the nine-page letter, nor was anybody concerned for her despite her repeated protests over the issue.

In the letter, Matondkar had named certain key persons in the party’s local units at the block and ward levels and other infighting which reportedly resulted in her maiden electoral loss in the Lok Sabha polls earlier this year.

On the contrary, she pointed out that the persons she had specifically mentioned in the letter to Deora for their “shoddy performance” in Mumbai Congress were rewarded with newer positions, instead of being held accountable for their acts and omissions.

“It is obvious that the key functionaries of Mumbai Congress are either unable or not committed to bring about a change and transformation in the organisation for the betterment of the party,” a peeved Matondkar pointed out.

She said her “political and social sensibilities” refused to allow vested interests in the party to use her as a means “to fight petty in-house politics”, instead of working on a bigger goal for the Mumbai Congress.

“I stand by all my thoughts and ideologies and will continue to work for the people to the best of my capacity with honesty and dignity. I thank all the people who helped and supported me through my journey,” she signed off.

The popular actress had joined the Congress on March 27 this year and later unsuccessfully contested the Lok Sabha elections from Mumbai North against sitting Bharatiya Janata Party MP Gopal Shetty, who won by a staggering 4,65,000.

Nevertheless, she led a high-profile election campaign attracting huge crowds in all her public meetings, rallies and door-to-door canvassing with different sections of people in her constituency.

Despite her resounding electoral debacle, she remained in the limelight and weathered many a storm, including the resignation of Rahul Gandhi as Congress President, followed by a string of changes in the Mumbai Congress.